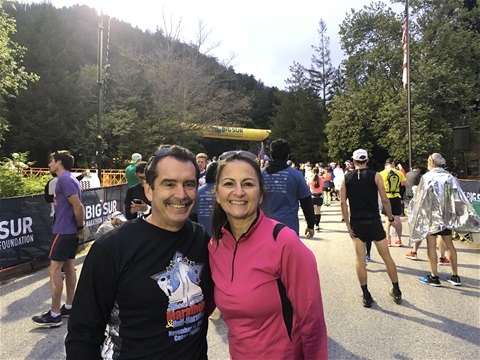 This marathon was so special to me in so many ways.  The majority of marathons that I’ve run have been tough, but for the most part enjoyable and fun.  The last few have been painful, horrible and hard!  I remember saying to Kim at the end of Napa, “Marathons are freaking hard.”  When I coach new marathoners, I’ve expressed how important it is to have mental toughness and not to allow negative thoughts into your head because they will affect your race. I really need to listen to my own advice!  Running Big Sur this weekend has given back my love for running that I really thought I had lost.

The expo: I’ve never volunteered at The Big Sur Expo until this year.  I was working in the San Francisco Marathon booth promoting their race.  As soon as we got to the booth I looked to the left and saw Les Wright who is the race director for the Maui Marathon.  This down to earth, approachable, friendly awesome guy gave Kim I that familiar smile that we’ve gotten to know in Hawaii.  He recognized us immediately and gave us a “hello.” His booth was filled with swag and vodka if you signed up for his races.  He had so many people stopping by and saying “hi” and they all left with a smile.  He’s a cool dude.

I met Elysha who is responsible for the San Francisco Marathon PR as well as the ambassadors.  I had such a blast promoting a race that I love!  Those 3 hours we volunteered flew by like nothing.  We ended up meeting an older gentleman named Philo Short.  He stopped by the booth to chat and told us how he has run 272 marathons and didn’t start until he was 55 years old.  He shared his philosophy on marathons and life. I listened to every word he said.   One thing that he said that I savored was “only think of one mile at a time, don’t think, “there are 26 miles, just take them one at a time.  When you are on mile 2, just worry about mile 3”.  I’ve done this before, but not quite as granular.  I would think of getting to the 5K mark, 10K, etc. and then run through the miles in between until mile 18.  Then, I’d use all my mental toughness tricks that I’ve got up my sleeve to get to the finish.  After we took a selfie and parted ways I saved all his words of wisdom with hope that it would work on race day.

The shake out run(s):  Yes, we pulled off attending 2 shakeout runs on Saturday morning.  The first one was with Adam Roach who has won The Big Sur Marathon 5 times and the other was with Michael Wardian who has won twice.  Both Kim and I have been following Mike’s extreme adventures after meeting him at the shake out run last year.  We were in time to meet Adam and get into the group photo. As soon as that group left for their run, we turned around and ran to Monterey Fleet Feet to run with Mike for his shake out run. It was great to see Mike again and I was also able to meet a couple of runners that also were Mike’s fans.  Gwenn from South Carolina and Samantha that was from NY.  We chatted and took selfies and made Facebook friends.  We parted ways and left.  We headed home to relax and get ready for the race the next morning.

We had to be at the Carmel Middle school at 3:30 am. We woke up at 2:00 am ate our bagels and coffee and headed to the bus pick up.  We ended up getting on the first bus and I immediately noticed that we were going to be at the back of the bus.  I did NOT want to be in the back for a few reasons, one that I was afraid I’d get bus sick and second, I hate public transportation and was concerned that he’d go off a cliff and kill all of us.

We left the school and we were being bounced all over the place.  The heat was blasting out from under the seat where I was sitting so I slid over to the seat across from Kim where the seat was even more uncomfortable. The guy sitting there was not so friendly.  All I could think was “I am so grateful Kim is here with me “and “I can’t imagine anyone coming to an event like this solo”.  The bus driver had Joe Walsh and The Rolling Stones playing.  The music was a great distraction as I dozed on and off during the long ride to the start. Finally, we arrived, and I was pleasantly surprised to see the starting area was changed from previous years.  There were endless rows of port-o-lets, and the old section that we used to be crammed into was now an open area for the starting corals.  They had coffee, water, bagels and bananas too.  This year instead of everyone throwing their gear bags into a large box trucks, they had rows of recycle containers numbered in rows for runners to bring their gear bags.  Kudos to whomever changed this from previous years. They also moved where the race started so it was off route one.  It made me not feel so bad that I didn’t pay extra to get the perks with the VIP runners world where we had heated tents, private port-a-lets, private gear checks and coach buses for the ride to start. I was prepared for the worst to be waiting outside for over 2 hours. We claimed out spot on the ground with our heat shield blankets and sat down and regrouped. We picked out our friend Michelle from CT too!  Funny how we bump into people we know. Next, after we got up to drop our bags into the gear check I saw Gwenn who I met at the shake out run! We hugged and went to the start.

I remembered what Philo said to me about taking the race at a mile at a time.  Of course, the first mile of any marathon goes by in a blink.  Kim and I had already committed to going easy and taking photos of every mile marker. We started our 26-mile journey and as I approached Marker 1, I thought to myself, “just worry about getting to mile 2”.  Then, before I knew it we were at mile 2,  took a photo and kept going.  The miles started to fly by. Miles 3-10 went by in a blink.  Then, the climb to Hurricane point started.  This is a 2 mile climb up until mile 12.  We shifted into our hill climbing low gear, kept our cadence and shortened our stride.  We silently passed people until we finally approached the top!  We took photos at mile 12 and continued down to Bixby Bridge. We approached the piano player and he was playing Bohemian Rhapsody.  I LOVE that song.  I jumped over next to him and started singing!  Kim was taking a video of this craziness.  I was cracking up as we thanked the piano player. We took off running and singing the rest of the lyrics.

We kept running and stuck to our nutrition/salt/hydration plan.  We experienced a lot of fun too. There was the dinosaur that was dancing in the middle of the course.  I couldn’t help myself and I had to dance with him!  There were cheer leaders, belly dancers, the drummers, etc.  Kim and I made a point of either taking photos or jumping in and dancing with them.  It was a blast.

We got to mile 25!  Last year our friend Buddy that works for the Big Sur marathon ran with us.  We knew he’d be there again this year and we spotted him.  He explained he couldn’t run with us this year because there was a runner he was assisting.  We gave him a hug, took a selfie and took off.

As we headed to mile 26, I was getting that feeling of sadness that it was almost over.  Who in their right mind thinks this at mile 26?  Using Philo’s words of wisdom, I still felt bulletproof.

Kim grabbed my hand and we crossed the finish line!  I was smiling ear to ear.  We went over to the B2B tent where Philo was volunteering to say “Hi”.  We found him! I told him, “I took your advice and took the race only one mile at a time” and thanked him for his wonderful words of encouragement.  He was so pleased and told us “This is the same thing you should do with life in general, not just the race”.  He gave me a hug and when we parted he said, “never lose your love for life and never lose your love for running."  I needed to hear this from him.  It’s funny how the right people come into your lives just at the right time. I hope he knows the impact that he’s had on mine.

There is the special place that I used to go mentally when I ran marathons that I ‘ve seemed to have forgotten.  I used to love to experience all there is to take in.  This race brought me back to that sweet place.  I was able to feel the love for running again that I seemed to have lost.  Thank you Philo ( : 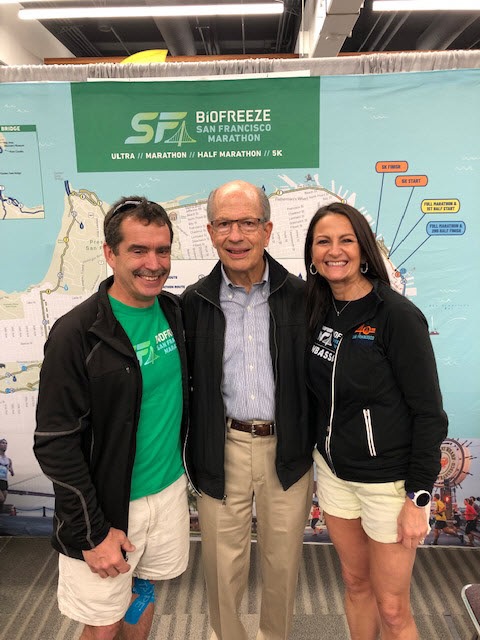 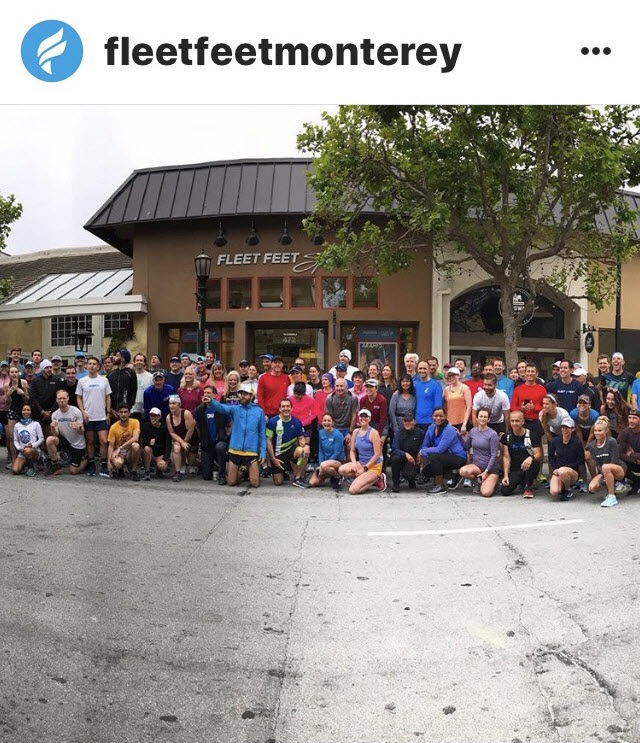 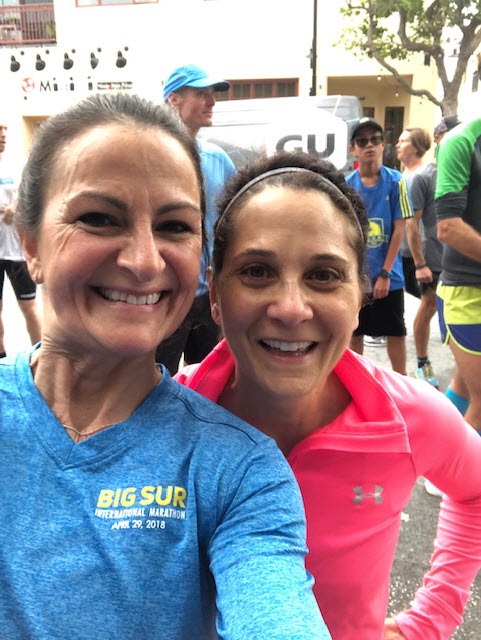 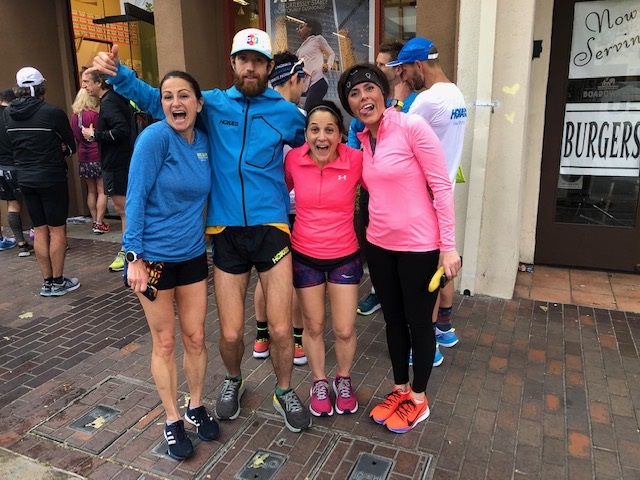 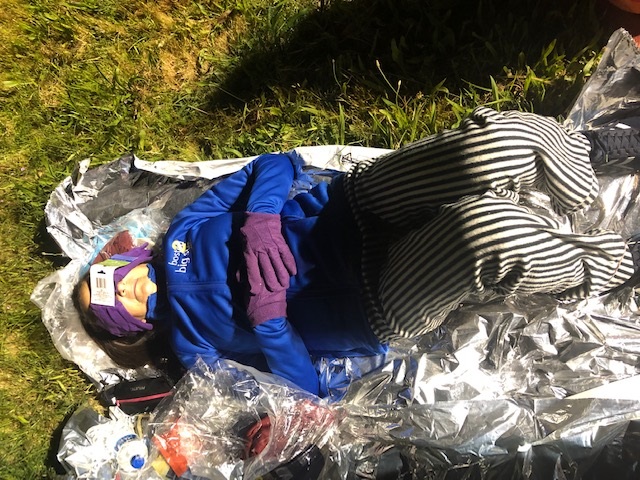 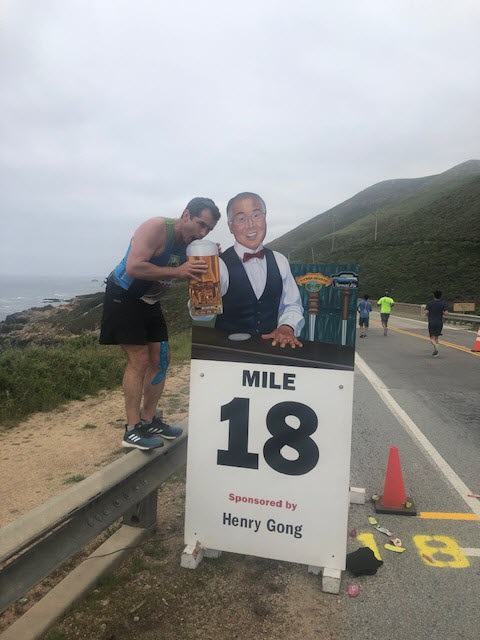 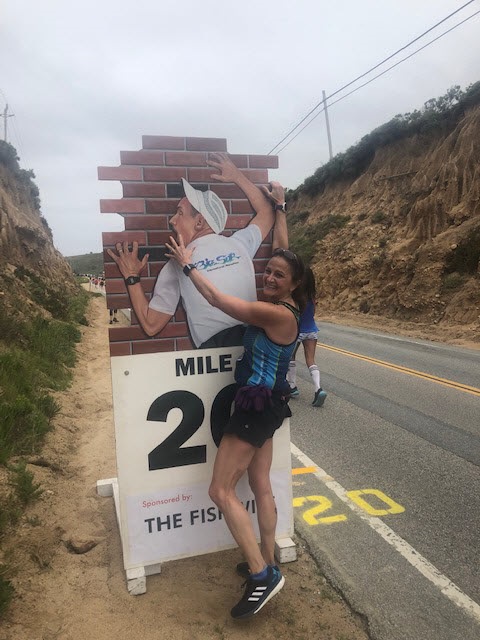 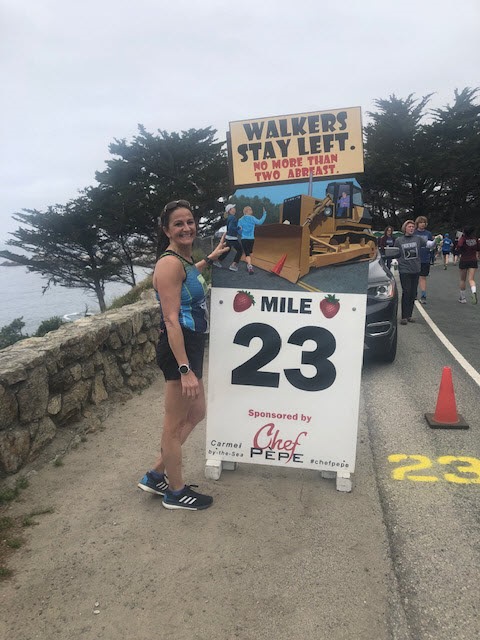 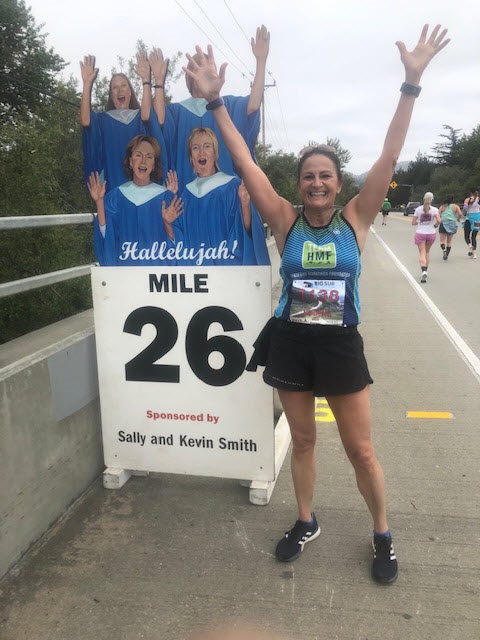