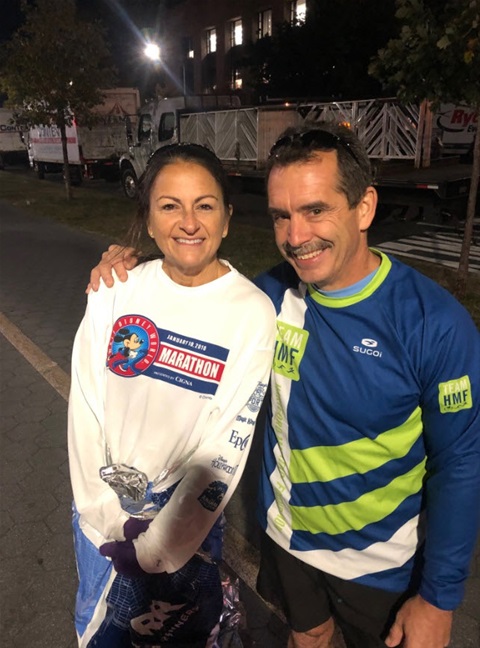 Brooklyn Marathon was special to me in so many ways. We signed up last year to run the marathon the day after we got married.  We both agreed to defer it to this year, so we could enjoy our wedding night without having to watch what we eat or drink.  This year the marathon was on our Anniversary.  I ran Brooklyn before and was “NOT” a fan of the course because it was all inside Prospect Park, which consisted of 6 large loops and 3 small loops, for a total of 9 loops in the Park.  Let me tell you, by the time you finished you were starting to swear at landmarks that you had already seen multiple times.  The course was different this year. The first 10 miles were on the streets of Brooklyn, and last 16 miles were 4 ½ loops in Prospect Park.

We got to the expo and were pleasantly surprised that even though it was small, it was packed with vendors that all were providing free samples of their products.  There were 2 types of energy bars (G2G & Good Snacks), Six-point brewery , coconut waters, VT Cabot cheese samples and Smartwater. We talked to the 4:00 hour pacers and showed them our 3:59:59 finish line photo from Hartford. They talked about their strategy and said “We will see you tomorrow” expecting our time to be around 4 hours. Next we headed over to the Six-point beer garden for some free samples.  We met a couple of runners that were running their 1st half marathon, Sara and Mike. Turns out, Mike lives in West Hartford! We talked to them about typical running stuff like nutrition, when to eat, hydrate and some helpful tricks that I use, like the “Ant song” and dedicating miles. We took a selfie and went on our way back to the hotel.  I did get their bib numbers, so I could track them to see how they did.

We woke up at 3:30, ate, did our “business” and then headed out to get the subway.  We got to the 59th street station and asked the guy working which train to take to get to Brooklyn.  He told us, and then noticed we had 4 minutes before the train arrived.  We headed down the stairs quickly.  Kim said “look, we have to go down one more level”.  So, we hurried and started down the next few flights of stairs until we heard the guy yell to us “Hey, you need to come back upstairs, you’re going to the wrong track”.  So now thinking we had only a couple minutes, I started running 2 steps at a time back upstairs.  My heart was beating in my ears!  Apparently, the schedule changes on the weekend.  Thank God that guy had us come back upstairs.  We got on the train and sat down. 5:00AM subway rides are pretty interesting with some pretty strange & scary passengers. I kept my head down and was deleting emails when Kim said “Jeanne, that woman just went outside and is peeing between the cars”.  I didn’t look up and remained focused on my emails. He said that all you could see was her hand holding on as she went to the bathroom while the subway car was speeding down the track - CRAZY.  As we got closer to our destination, runners started to get on the train and by the time we got there we were “with our people”.

When we got off the subway it was still dark as we headed out to the Grand Army plaza. We met our friend Kristyn to give her the bib we picked up for her near gear check.  It was cold, so I wanted to wait to get rid of my sweat pants and jacket until the bitter end.  Unfortunately, you must check your gear before you head through security and into the corrals.  There were no port-o-lets outside the corrals, so I was eager to get in.  They also had the gear organized by the last number on your bib, which I’ve never seen before. I checked my gear and wrapped a heat shield around my legs and put hand warmers in my gloves.  It was quite chilly!

We said our good-byes to Kristyn who was running the half and headed into our corrals.  There were port-o-lets lined up inside with minimal lines.  The announcer came on the loud speaker welcoming the runners.  He was asking runners “who is running their first race” and the young girl behind us raised her hand.  We started chatting and the poor girl was super scared.  Then the announcer asked, “Who is here from Brooklyn”, the dude next to us raised his hand.  He was dressed in short shorts, hot pink sneakers  and was sporting a man bun. Finally, the horn went off and we started to run.

I enjoyed the first section of the “out and back”.  The course was fast, and I recall saying to Kim, you should come here and run the half, I bet this would be a great one to qualify for NYC.  We were able to see Kristyn 2 times before we got back into the park.  We also saw the 5:30 pacer.  He was dressed in leopard briefs and was had something written across his chest that I couldn’t make out.😲

Kim started chatting with a young guy that was running his first ½ marathon.  He said “I’ve only run a 5K and decided I’d try a half marathon. All I could picture was my first ½ when I pretty much did the same thing. I didn’t train and didn’t know about nutrition.  I ended up walking around mile 6 and wanted to die!  He seemed young, so hopefully he wouldn’t experience the same horror as I did.  We eventually lost him and before we knew it we were at mile 10 heading into Prospect Park.  I recall looking down at my feet where there was broken glass and I thought to myself, I’ll be seeing you another 4 more times.  I looked up at the first mile marker and it was Mile 24.  Ugh, this was tough to see so early on! We both knew that we were going to running these loops for a while.

My legs felt unusually good, and my hamstring issue wasn’t bothering me. I was having such happy thoughts of our anniversary plans for the weekend.  I thought about staying at Park Lane Hotel again and about our dinner at Tavern on the Green.  I had my entire meal planned out before I finished.  We made our way around the first 3 1/2 mile loop and there was the broken glass again.  There was a sign for “merging runners” where the slower runners were coming into the park.  There was quite a bit of weaving around the runners to find our happy pace again.  Before I knew it, I was running over the broke glass again.  I thought, wow that went by fast, I only have 3 more loops to go!

As we continued, I had the song “A day in the Life” by the Beatles in my head.  I was singing it to myself over and over in my head “Woke up, got out of bed, dragged a comb across my head”.  This song had the  perfect beat to help with the climb to the highpoint of the park. Next, we merged with runners coming into the park, and I ran over the broken glass again.  2 more loops left! Now we were finally hitting the miles markers that were looking forward to!  I still felt great!  We looped the 5-hour pacer, then looped the 5:30 dude with the leopard undies!  There were other things that I recall looping; horse poop, a huge flattened dead frog, the cardboard from the inside of a new hat that looked like teeth and the 6 hour pacer twice.

Up ahead, I saw the dude from Brooklyn.  I recognized his man bun and pink sneakers.  He struck up a conversation with Kim and I listened to those to chat for a few more miles.  There was plenty of GU on the course too.  It was located just past the turn for this finish line, that we eventually passed 4 times. There was also water & Gatorade every couple of miles. For a small race there was plenty of cheering.  Kim had on his Team Beef shirt.  People loved yelling “Go Team Beef” and Kim would put his hand up with a fist pump.  I just smiled thinking, “I’m with him, he’s my Beef”💋.

On one of the last loops we both got a whiff of marijuana.  I didn’t say anything and looked up at the Medical tent and thought “geez, they even have medical marijuana” and what was even funnier was Kim said out loud, “oh look, there is the medical marijuana tent, you can smell it.  We both started cracking up!😉

There is something to be said about not staring at your watch and trying to keep a certain pace.  I’m not sure if that’s what made the miles go by so fast or if it was the dinner that I was looking forward to, but it was all working.  I was still singing the Beatles song in my head and before I knew it I saw mile marker 24!  Kim said “Jeanne, come on, don’t lose your pace, you will get the 20-minute BQ window. That kept me moving.  I never felt tired until the last mile.  Finally, we got to the big sign that read “Finishers go left”, and a woman yelled “keep going unless you’re finishing” and I yelled “I’m f%#ing finishing”!  With all my might I kicked up my pace and was heading down to the finish line!  Kim grabbed my hand and we put our arms up in the air. The crowd went wild screaming as we crossed the finish line!

This was the best way to celebrate our first Anniversary; 3:43:54.🙂

We saw Kristyn who was waiting for us at the finish line.  It’s always special to see a familiar face at a race.  We took photos, talked about the race, got some food and headed out to find the subway.  We asked a volunteer, which way do we go to get to Grand Army Plaza subway? He said “there 2 ways, one way is longer and flat, and the other is shorter, but it has a hill.  We looked at each other and said, “What the hell, we’ll take the hill, what’s one more time?”.  We smiled and started walking toward the hill.

I managed to run faster in Brooklyn than I did in Minnesota with tired legs from the 2 marathons that we ran the previous 2 weekends. Later, after we got to the hotel I checked our official times. Kim and I placed in our divisions!  I truly believe that running side by side with Kim is magical. The love between us is undescribable.  We share this passion for running together.  When we are alone we are strong runners, but together we are unstoppable.

Happy 1st Anniversary.  What will next year bring? 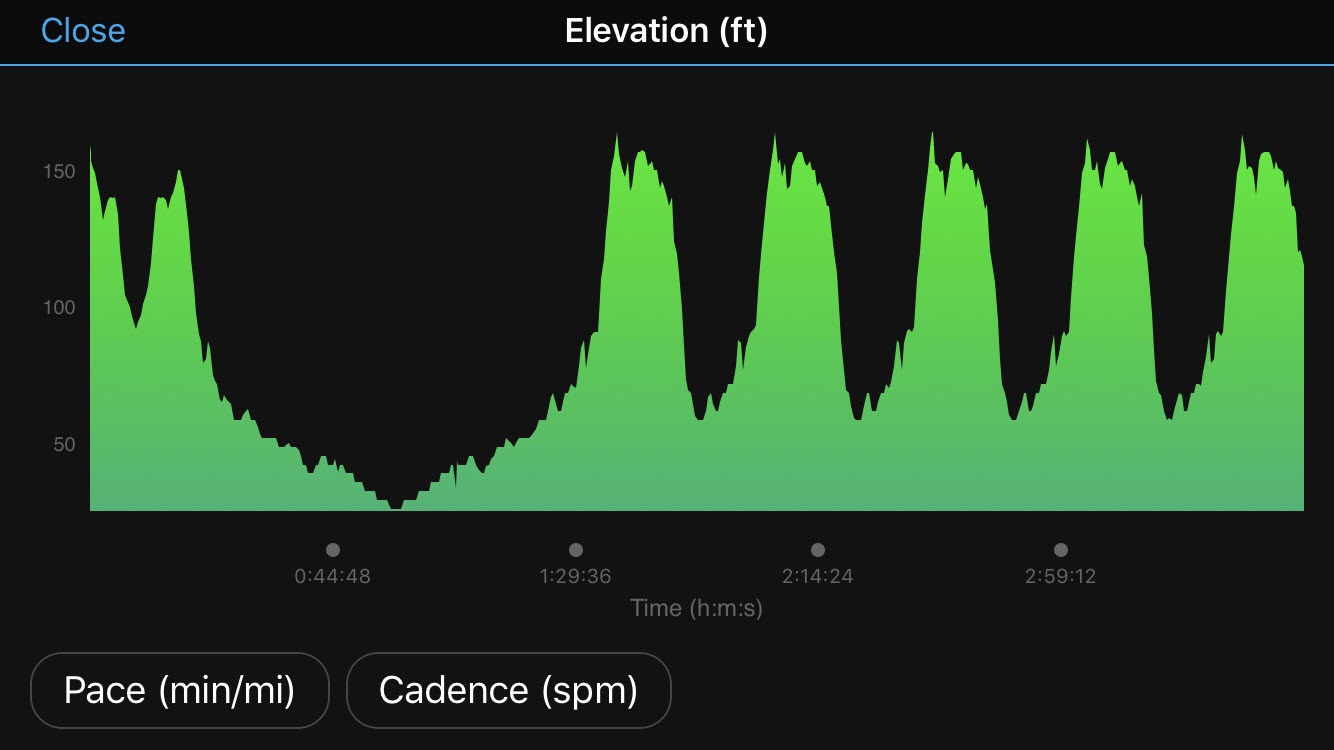 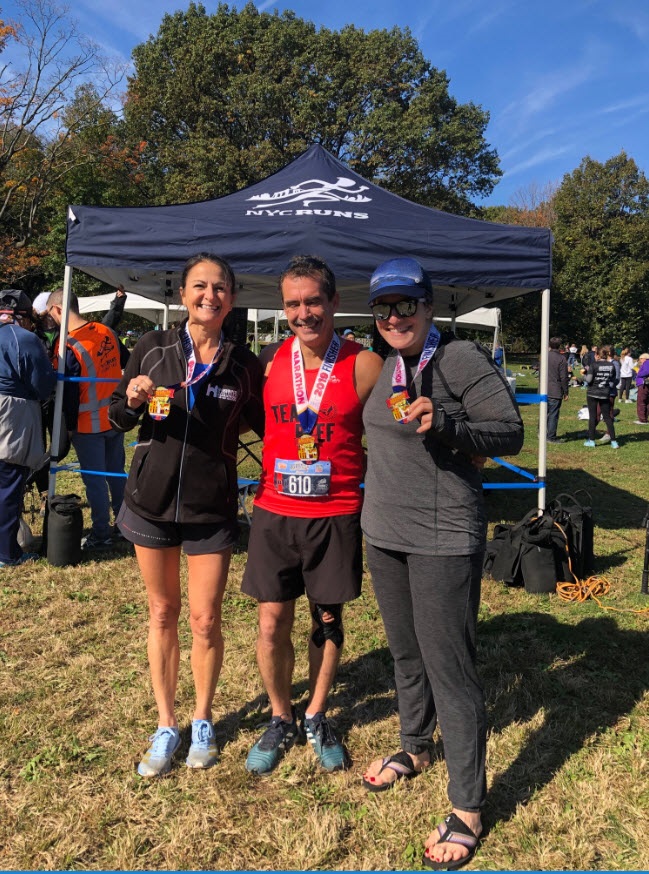 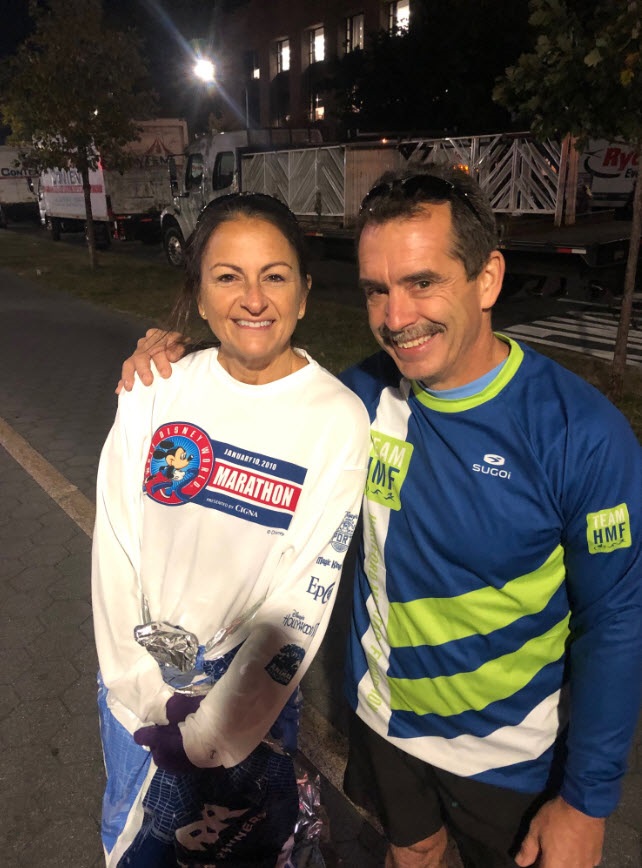 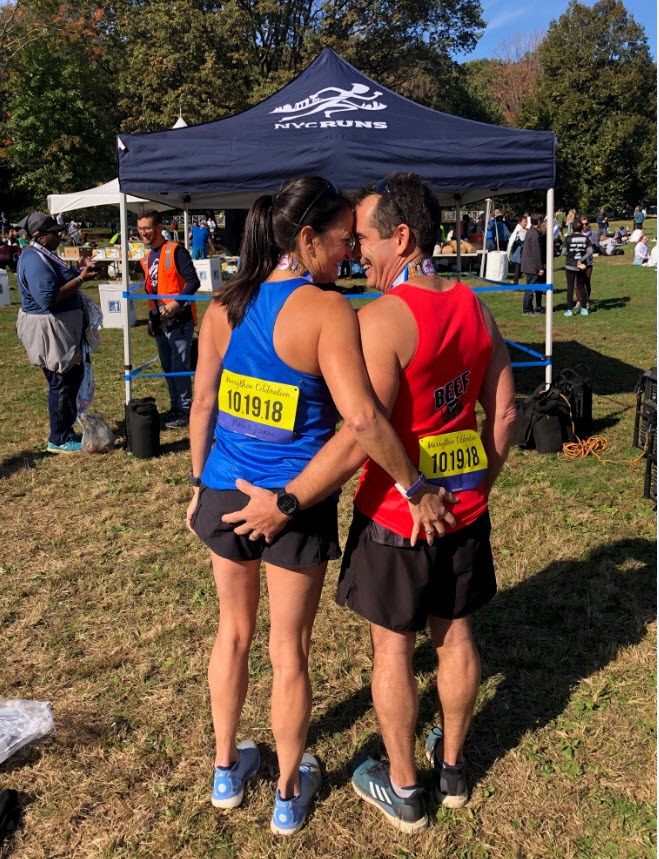 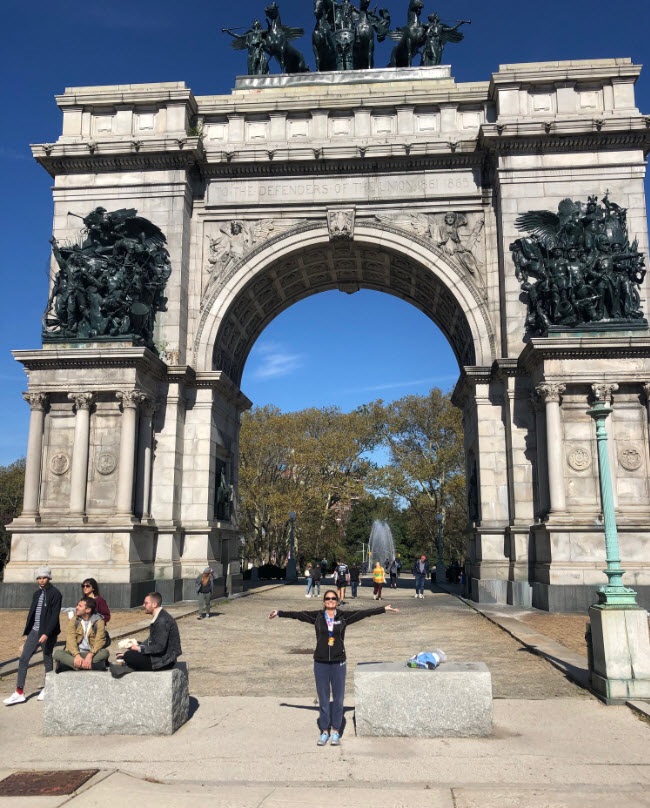