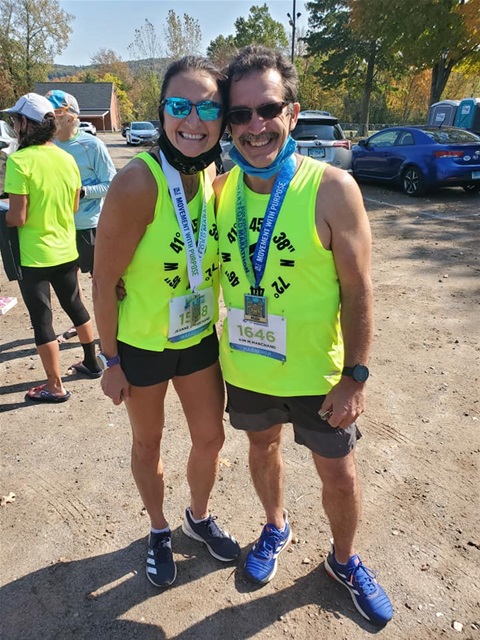 The Hartford Marathon is an event that I look forward to every year.  I take off time from work and volunteer during the day to help set up Bushnell park in the evening.  It’s a race that Kim and I coach runners all summer and help prepare them for race day.  Since 2013 we have paced the marathon with all different times from 4:45 – 4 hours.  It’s such an amazing experience to be involved with such a great organization.

This year we started coaching a new group at the end of June with the uncertainty if the race would be canceled.  At this point races were already canceled up to July.  With no vaccine for  the COVID-19, fall races seemed pretty unlikely. That didn’t stop our 30+ runners from showing up each week, running and carefully practicing social distancing.  Every Sunday morning since the end of June our dedicated runners were out there pushing through the heat and humidity. Some runner conquered new milestones as they were running longer distances than they’ve ever experienced.  Each week running friendships started to develop that I refer to as our #fleetfeetfamily.

I remember the day that Beth Shluger announced on Social Media that the Hartford Marathon was canceled.  I watched the video and cried as Beth delivered the most heartfelt announcement that the races would be virtual and that ALL proceeds from the registration would go to charity.  I signed up immediately.  This year there were different race challenges and Kim and I signed up for the “Grit and Gutsy” challenge that consisted of 5K, 10K, half and full marathon.  There were quite a few in our group that also signed up.  As usual, it seemed like a good idea at the time!

This year Kim had developed a cyst on his L4 and L5 and he didn't run for a month due to the  extreme back pain.  As race day started to get closer, I never expected him to be able to run.  He had gotten a shot in his back to try to help with the inflammation and was just starting to move a little better.  The doctor advised Kim not to run.

We met with other coaches and the owner of Fleet Feet, Stephanie to organize the best “virtual” race-day experience that we could provide our group.  The race was going to be held in Simsbury at the bike path. We discussed water stops, volunteers and even had organized a socially distanced pre-race pasta dinner.

The first race challenge that we ran was the half marathon on Thursday.  There were about 10 of us that got together to run.  Kim took photos and said that he was going to walk while we were running.  I saw him after the first “out and back”.  He was doing a run/walk very carefully to avoid any stabbing pain.  By the time we finished he had 9 miles completed.  We got home and Kim said, “I’m going for a walk” and left.  I started to clean up and I looked outside and there he was running.  I swear, every time I turned my head he’d be out there sneaking in a few miles.  He was determined to get the other race distances completed as well.

The next race challenge was on on Friday where Kim and I each did our own version of the 10K.

Race morning, we had different start times.  Kim set out with the early start anticipating he would take longer as he was planning a run/walk.  At 6:30 am there was a group of around 10 runners with headlamps ready to go.  I gave them a quick warm up, took a photo and got them to the start line.  I yelled out the 10 second count down and did my best “start horn” impression I could provide, and off they went. I was told after that my horn sounded pretty authentic!

The next group was starting at 7 am.  Steph showed up with post-race goodies and brought a speaker with music to get everyone pumped up to run.  Again, I gave the runners a quick warm up, Stephanie played the Star-Spangled Banner and we all took off our hats.  I looked up at the flag and my eyes teared up thinking how messed up our world was at this time. I closed my eyes and prayed to have our lives back to normal.  We took a group photo, I provided the count down and did my race horn impression and off we went.

I knew as soon as I started to run it would be challenging. We had run the virtual London marathon the previous weekend and I had some pretty tired legs.  After I finished the virtual London, I set out and ran with Kim for his last 5 miles.  What was I thinking?  A 31 mile day.  To top it off, I ran the half marathon on Thursday and a 10K on Friday.  I started running with Marissa, Kaitlyn and Adrian, also known as  “the fast kids”.  I started to slow down after the first out and back.  Around mile 15 I told them to go on without me.  I knew if I stayed with them and slowed down it would mess with my mind. As they pulled away I walked a little and ran to the next water stop. I stretched, fueled up and headed out with a plan to break up the rest of the marathon into sections.  I knew if I stopped and stretched to give my legs a chance to recover.  I loved this course with the fall colors on the trail.  It was beautiful. It brought me to a very happy place, and I was taking it all in.  There were so many people cheering for us and the volunteers were super.  Derek, our speedy runner from our group was volunteering as his goal race was scheduled for mid-November.  He was at the road crossing around mile 2 and let me tell you, he took his volunteer position to the next level.  He stopped traffic and cheered us on.  I got to see him a couple times on the course.  He just put the biggest smile on my face.  Later, I found out that he not only kept us safe, he also provided some pretty strong words of encouragement to get our runners to finish.

I saw Kim a couple times when I was running with the “fast kids”. I saw him after the last turn to go back to the finish around mile 19.  We stopped and talked and he looked good.  He was still doing a run/walk and asked me to turn around to run with him.  I love him, but I couldn’t go back and run anymore miles.  I had my plan to finish and I needed to stick to it.  Also, there was a slight incline if I had turned around.  I was hoping he would just catch me. I had already planned to stop/refuel and stretch at mile 22 and then at mile 24.

Marcie was on her bike with a backpack filled with nutrition supporting runners with fuel as well as words of encouragement.  I saw her as I approached mile 24.  She stuck with me the last 2 miles and talked to me.  I’m not sure if she realized how much that helped me to get through.  She was like an Angel on wheels!  As soon as I got to the final decent, she said, “you got this Jeanne, finish strong, I’m going to help other runners now” and off she went.  I could hear the cowbells in the distance and see the finish line!  I first saw Diane who seems to appear out of nowhere at virtual races!  She did the same when we ran the first virtual Boston in April.  It took everything I had not to start crying when I saw her. I kept going and I saw a little woman dressed in pink sitting in a chair holding a flag cheering for me.  She was so sweet.  The finish line was just ahead lined with so many people with cowbells!  Music was blasting!  I could hear people yelling my name!  I looked at my watch and I was like “oh no!  I am short .2 miles!  I ran through the finish and kept going into the parking lot, then out of the parking lot down the street and then back to finish.  Finally, my watch chimed 26.2.  I started to walk to cool down and saw Rosanne, this is when I started to cry.  I hadn’t seen her since pre-Covid.  She rode her bike here to see the runners. We only got to chat a few minutes.

I went to my car, grabbed my cowbell and ran back to the finish to cheer our runners.  There were so many people cheering, dancing, celebrating their victories.  It was incredible.  We cheered our runners as they finished.  I started to track Kim and knew he was close.  When he approached the finish, the crowd started up again cheering!  I was never so happy to see him running effortlessly and to see his smile. It was priceless.  Fox-61 news was there and filmed Kim crossing the finish line.  After he was done, he joined in cheering for the other runners.  Sami Vega was finishing, and his family was cheering for him. His finish was very special. His wife and family had a banner with his beautiful Angel Kassi that passed last year.  Kim and I wore our #TeamKassi bibs on our back supporting him.

More runners were coming into the finish; Mike Rickaby, Sami, Stanley, Rauf, John, Jose, Mike Fournier,  Colleen, Deb and a few more.  It was very special to see Diane and Wilson finish as this was their first marathon.  People were going wild cheering.  Then, Fernanda and Henryk were on their final stretch.  As soon as Henryk crossed, that little woman sitting at the finish jumped up with her flag and was yelling “that’s my son”!  He just ran 26 miles.  She was so proud of him! I get choked up thinking about her!

Finally, all the runners were done! Everyone finished strong!

Wow!  What a day!  I know it wasn’t the “real” Hartford Marathon, but it was a day that I will cherish forever.  I made so many new friends this year that will forever be part of our #fleetfeetfamily.  Hopefully next year we can all be running together and finishing under the iconic arches in Bushnell park.

Oh, one more thing, Kim decided to finish his “Grit and Gusty” with his 5K when we got home from the marathon.  I got mine done the next morning.  We watched the Fox-61 news that morning.  They featuered a story on the HMF virtual marathon; there was Kim crossing the finish line.  Kim said “I hope my doctor is not watching this”……. 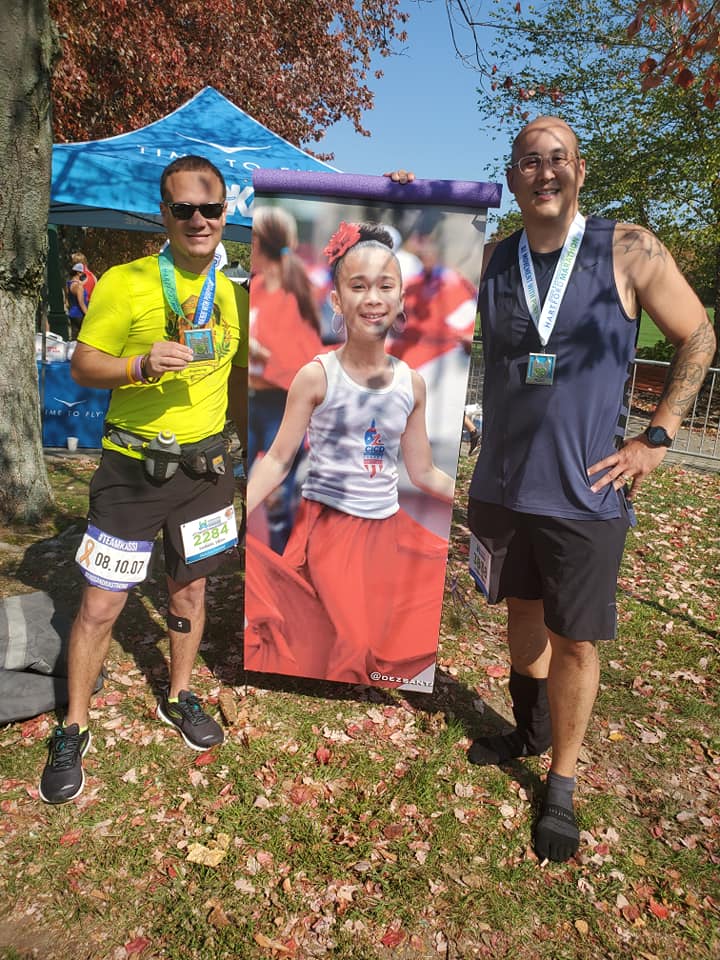 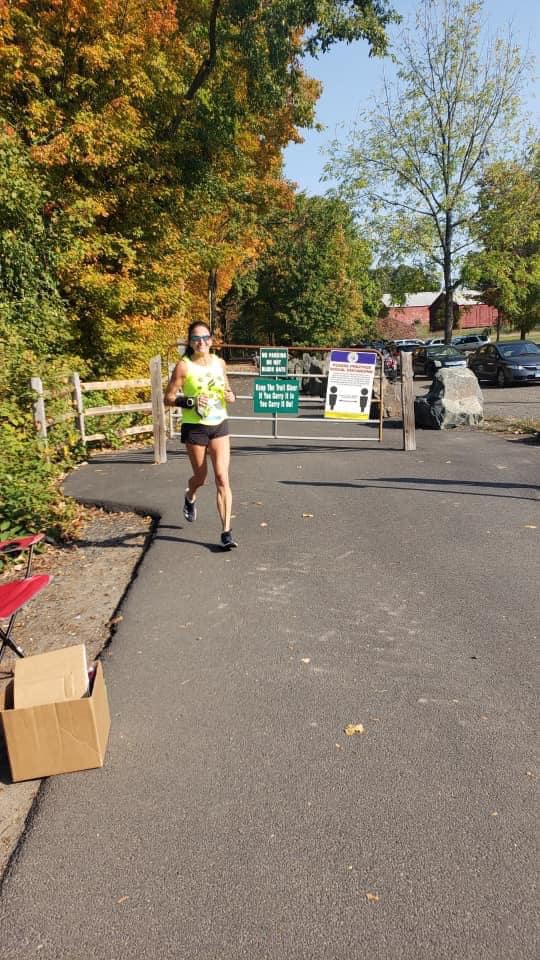 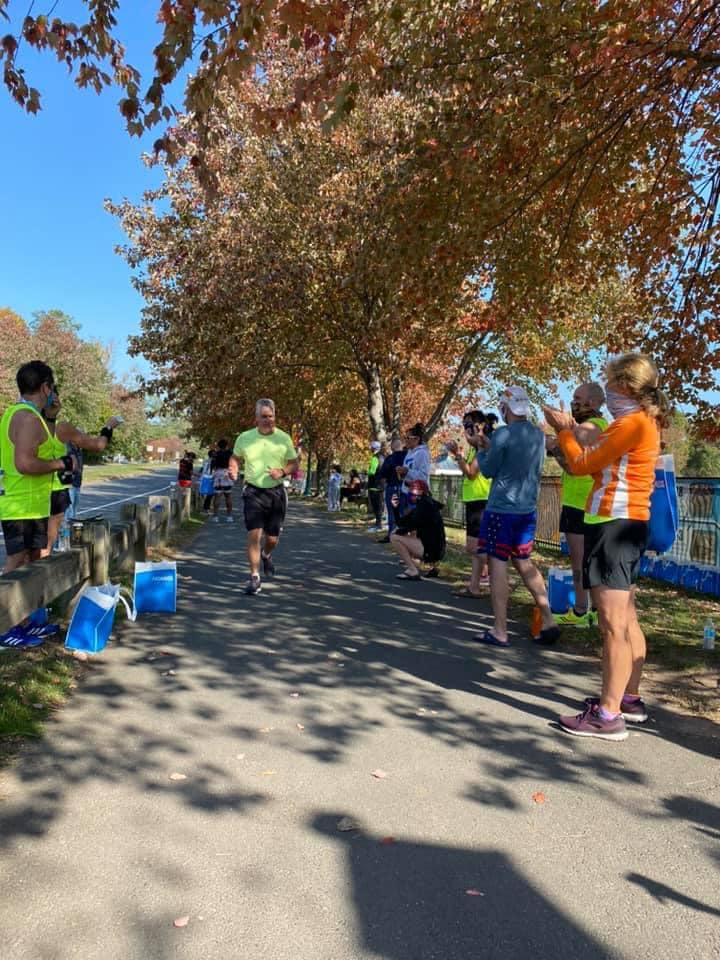 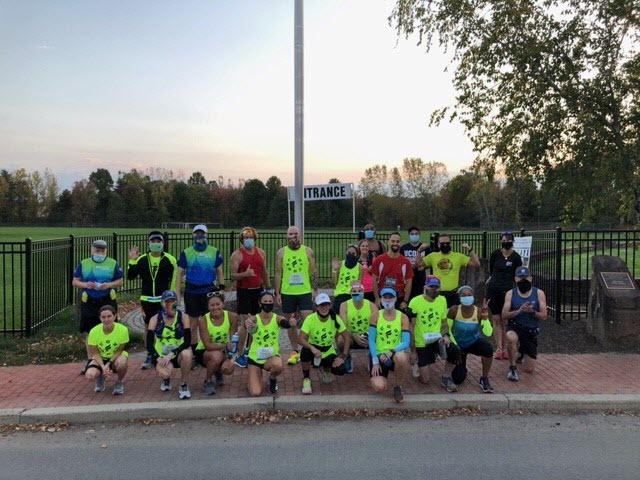 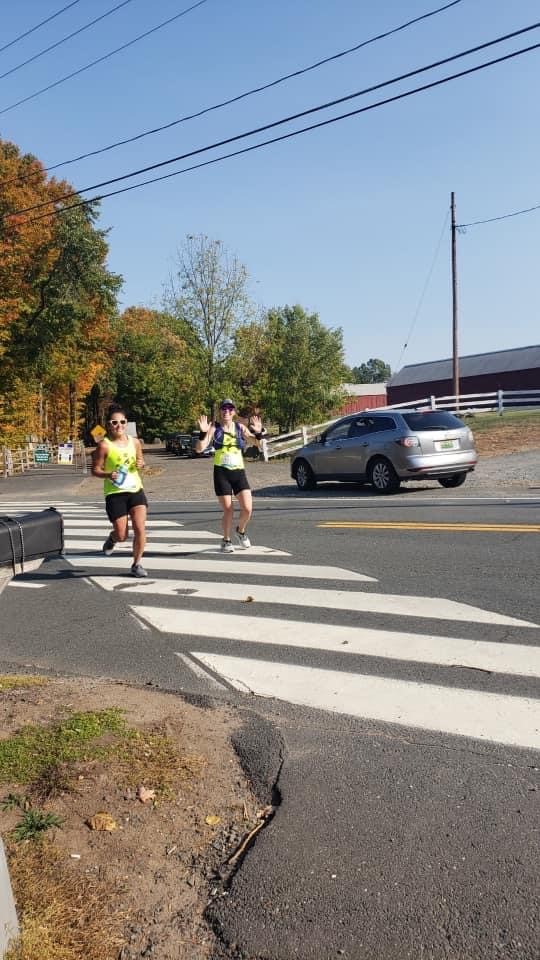 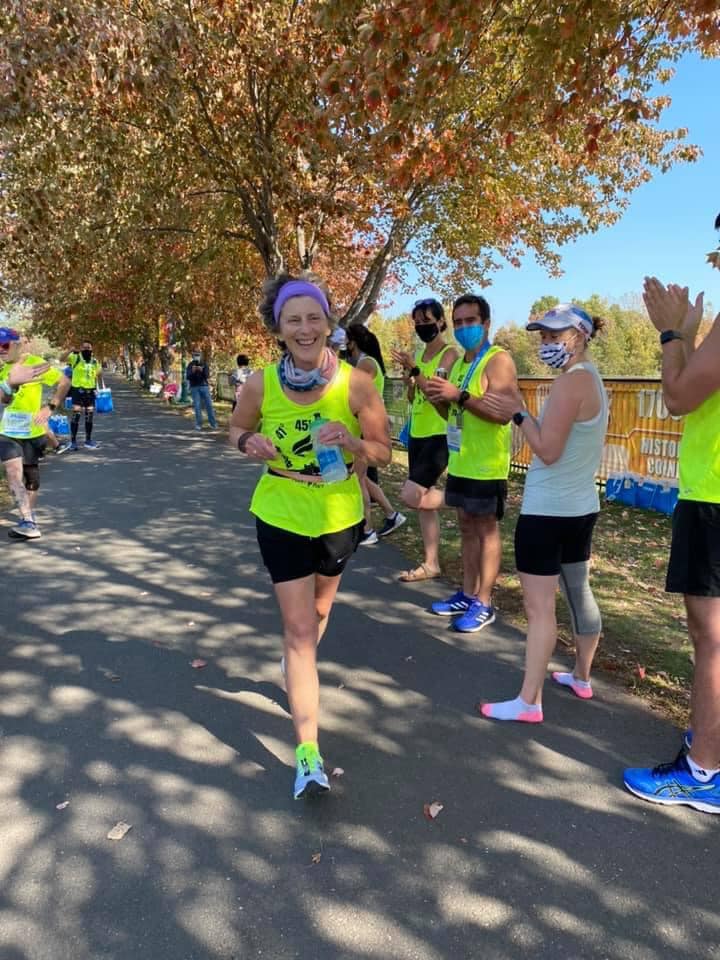 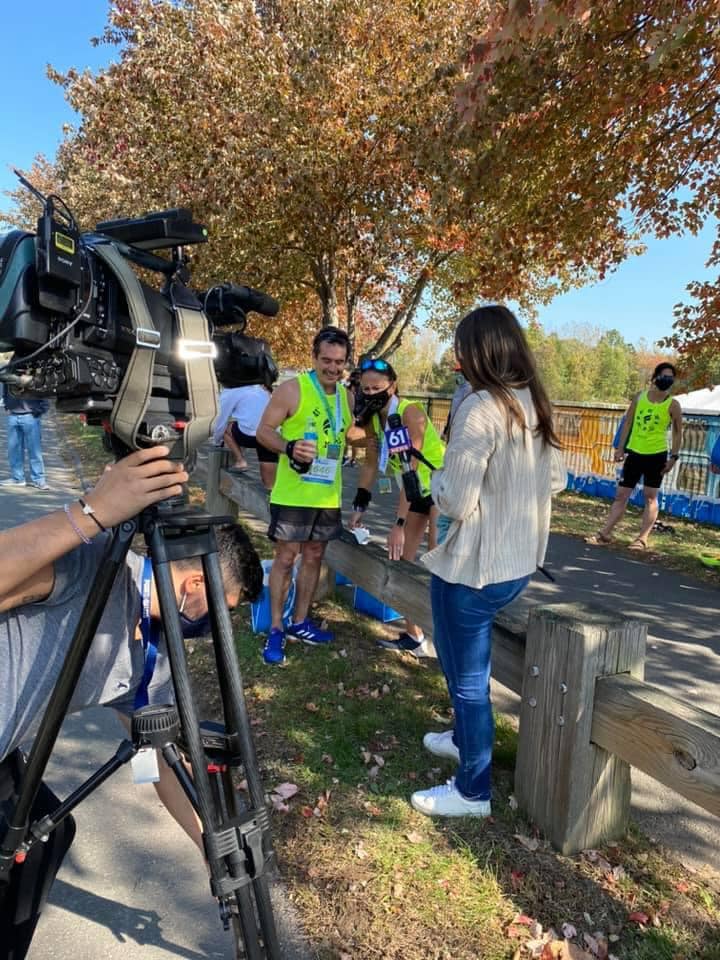 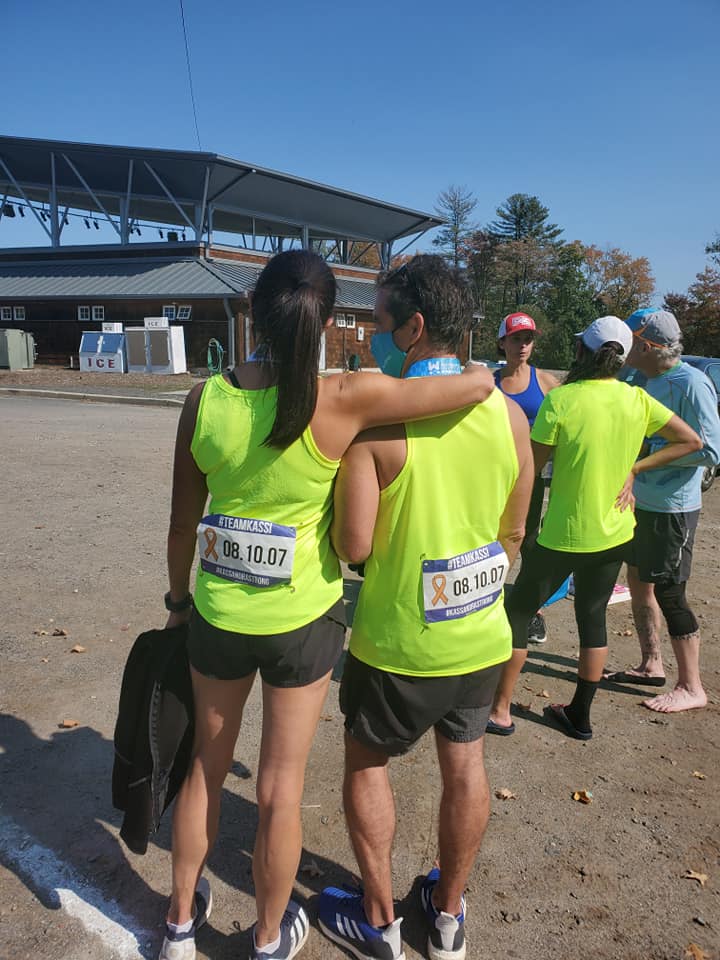 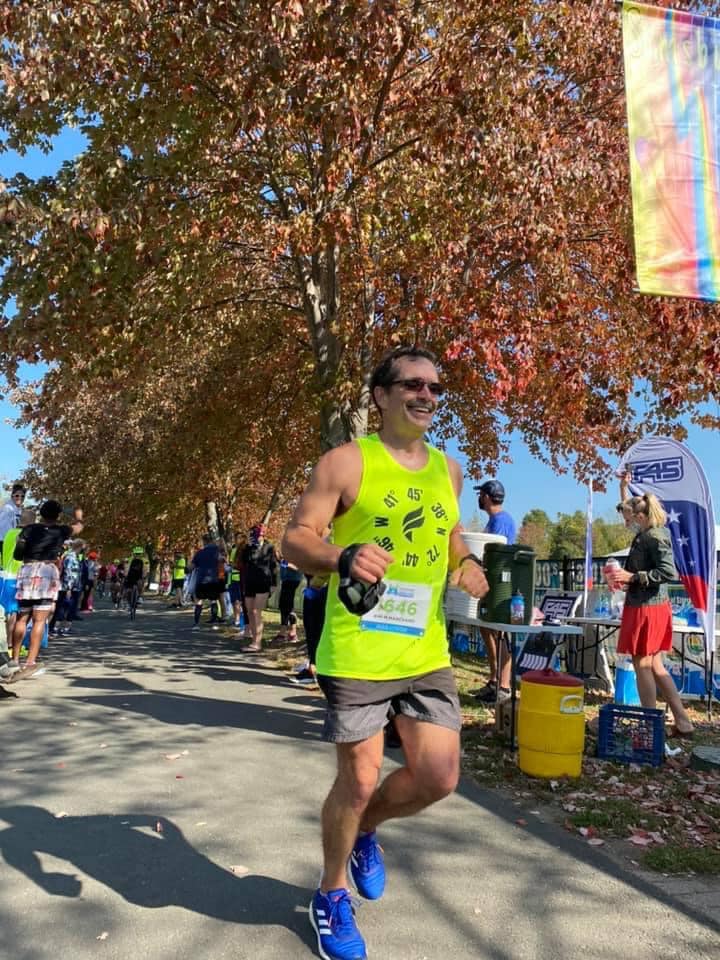 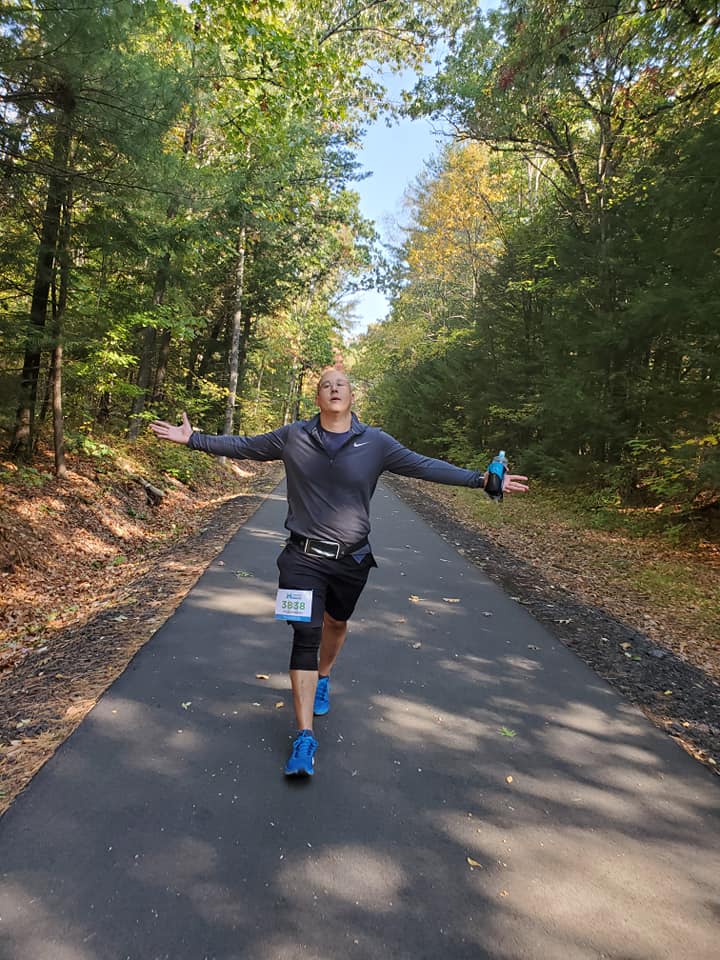 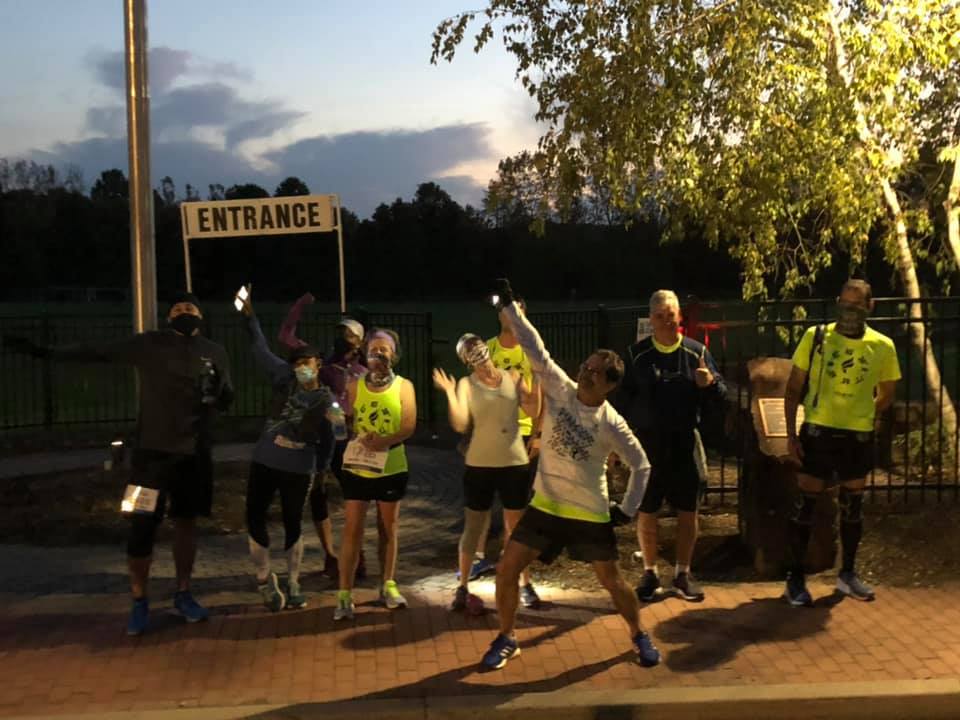 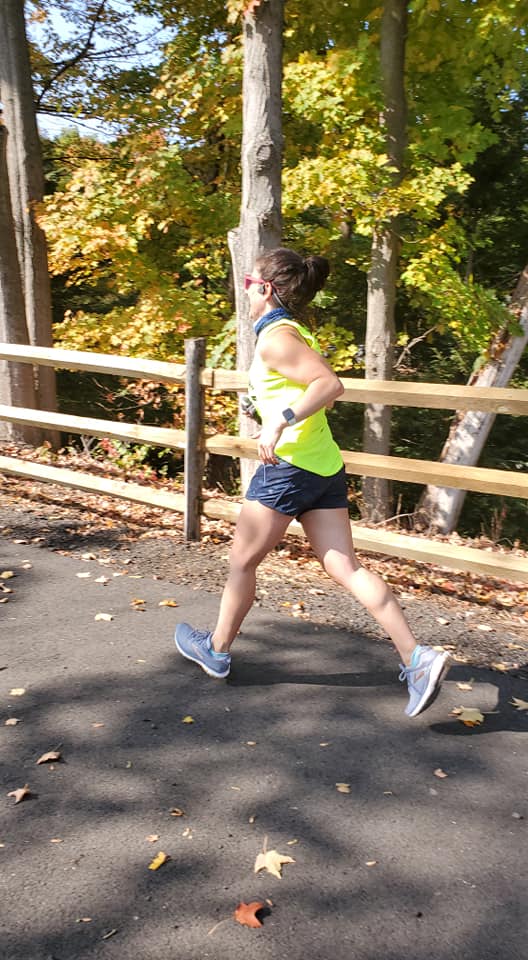 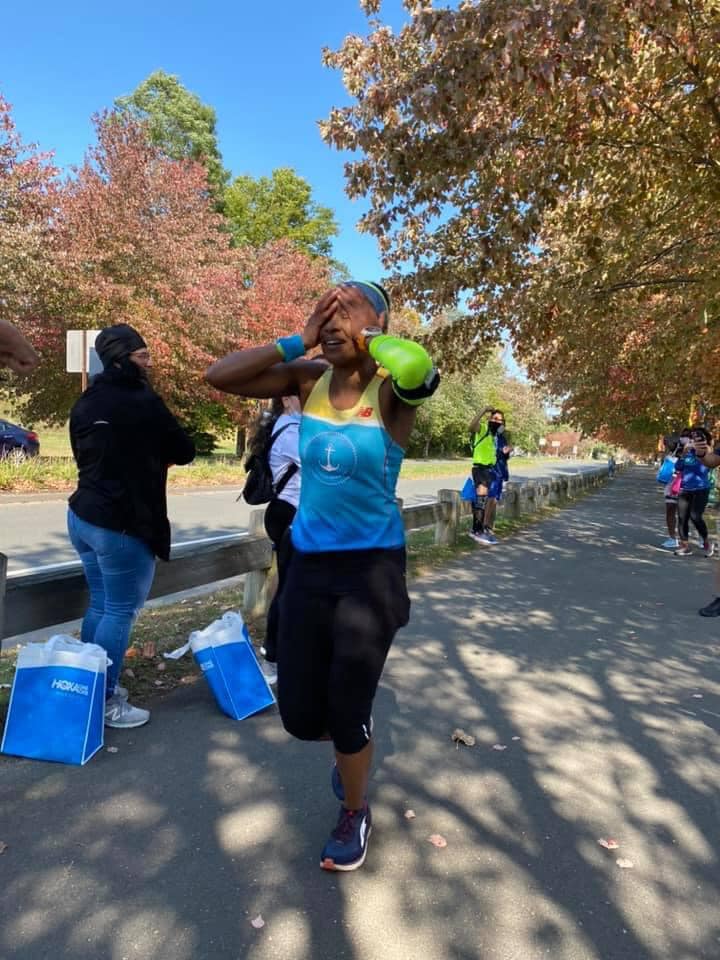 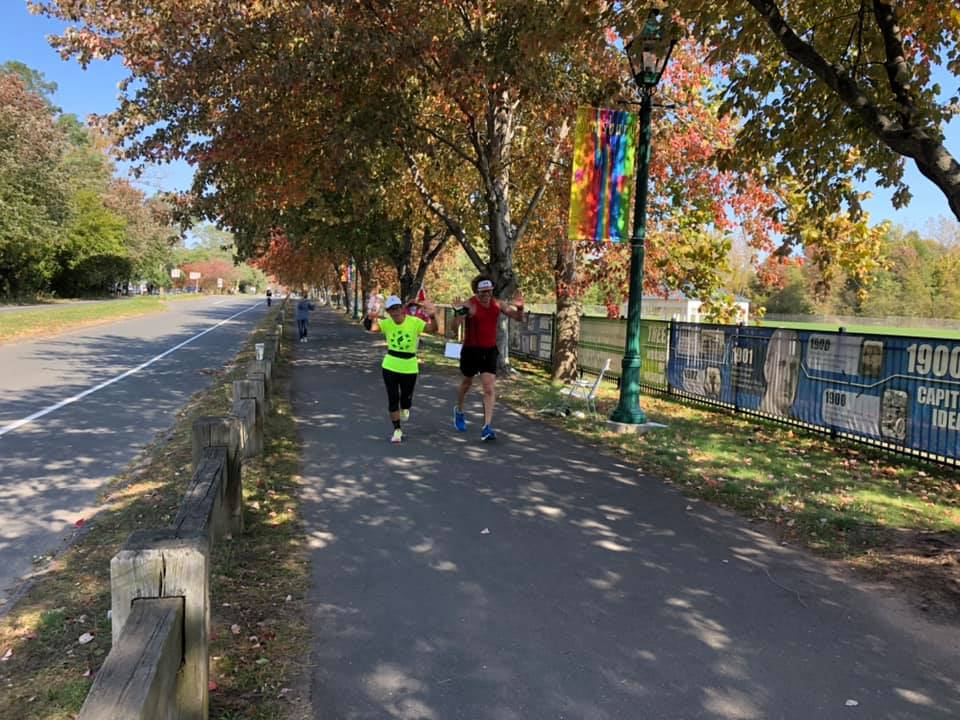 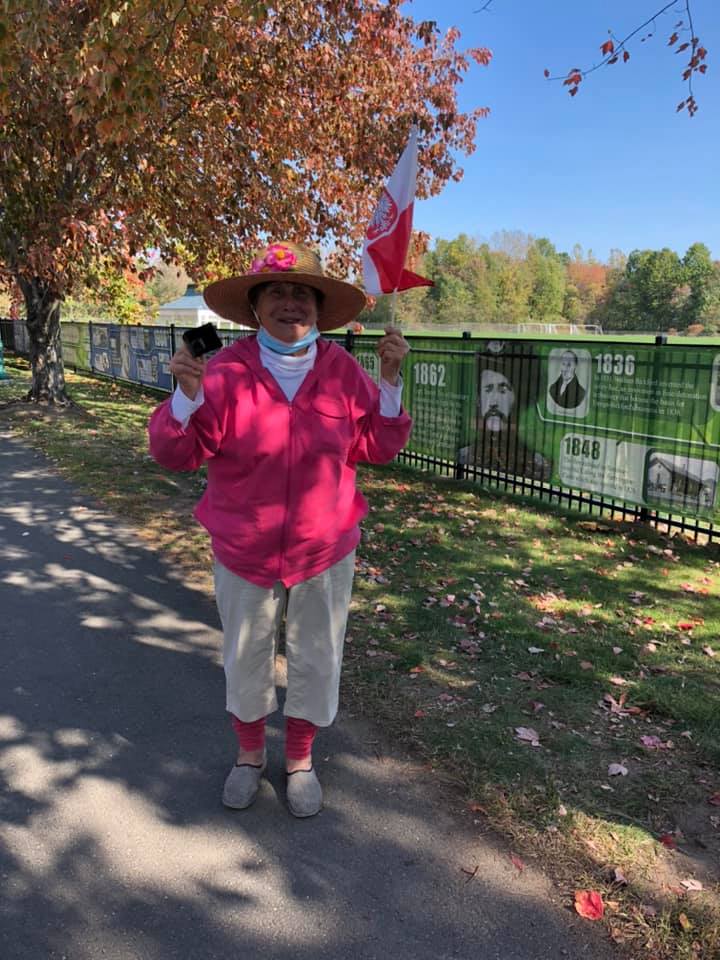