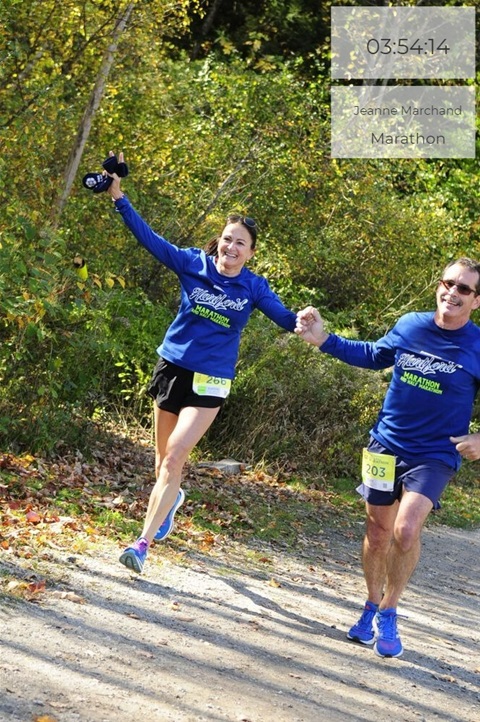 This marathon was snuck in to get Kim to his 100th marathon at the 50th NYC marathon on his birthday.  We would have been on target but we canceled London.  The Loco marathon is a small race in New Market, New Hampshire.  We read the race recaps on marathonguide.com and they were mixed reviews as this race is 2 loops.  It’s supposed to be a fast Boston Qualifier mostly flat with some rolling hills.

We were planning on leaving CT based on the bib pick up.  When I went back on the website it said bib pick up was only on race morning.  Both Kim and I thought there was bib pick up the day before the marathon but couldn’t find it in the communications.  The instructions were a bit confusing as we were instructed to go to the Rockingham Ballroom race morning to get the bibs. But, it was clear that there is NO parking at the ballroom and cars would be towed.  The race parking was in an industrial park and there were buses every 5 minutes to the ballroom.  I wasn’t sure if we were expected to park, then take the bus to the ballroom and then bus back to the car and then back after.  As it turned out once you’re bused to the ballroom you don’t leave until after the race.

When we arrived in NH we drove the course which seemed pretty forgiving. We were able to drive as far as the last 3.5 miles that were on a trail/bike path.  We parked and got out to check out the path which was completely covered in leaves. This worried me since I’ve been known to face plant on trails.  In the distance we heard what sounded like dirt bikes on the trail.  Later we discovered there is a race track nearby.

Dinner was at an Italian restaurant in the same town as the race track.  We ate well and then went to bed a bit too early.  I never sleep the night before the race, but this night seemed worse than usual.

We woke up early and headed to Industrial park to pick up the bus.  It was 31 degrees when we left.  I was freezing!  I had hand warmers, mittens, a throw away shirt and pajama bottoms to wear while we waited. When we got to the ball room I was pleasantly pleased to find we could wait inside and stay warm until the race.  There were a ton of volunteers and everyone was extremely helpful.  They had a bag check but also told us you can leave your stuff anywhere in there and it will be safe.  The ballroom was pretty crowed with runners.  I looked around to see if I was the only one freezing to death.  Some runners were wearing tank tops and shorts.  I just don’t get it!  We waited inside until 5 minutes before the start.  I took off my pajama bottoms and walked out to brave the cold!

We found the 4-hour pacer and were pleasantly surprised to see our Fleet Feet peep Jonathon!  I can’t tell you how emotional I get when I see someone at an out of state race.  I got all teared up!  They played the national anthem and we were off.  My feet felt like I had pillows on the bottom because they were so cold and frozen.  It took 3 miles to start to feel my toes.  The 1st loop of the course was pretty forgiving with rolling hills and I felt great.  Houses were decorated for Halloween to the extreme!  The fall foliage was breathtaking as we ran past some farms.  We saw horses, cows, wild turkeys and a ton of road kill!  I kept yelling “snake” when I ran by another dead one.  There were 2 sections that had what sounded like prehistoric birds that were so loud! Kim mentioned it sounded like an Alfred Hitchcock movie!  We were at the final 3.5 miles and heading onto the bike path which was now clear of leaves.  Someone told us earlier that they leaf blow the trail before the race.  The path had some rocky/rutty sections that made me nervous for the second loop to run with tired legs.  The 3.5 miles seemed more like 6.5!  I was not looking forward to doing that section twice.

We got to the ½ way mark with a 1:54 clock split.  Then we approached the 16-mile mark and looked for our shirts that we had tossed at mile 3. They were laying on the ground next to the water table. I usually toss my throw away mittens but I never did this time!  We even kept our top layer on the entire race.  There were sections that were warmer and some sections windy and raw.  From mile 18 on I started to feel my breathing was off as I was getting tired.  I ended singing the ant song in my head to get my cadence back and breathing in sync.  I typically don’t need to start mental toughness so early on but I was tired.  The forgiving 1st loop now had hills!  We stopped at mile 18 to use the por-o-let and to my surprise it was not anchored.  I was worried it would tip over!  We got to the bike path and let me tell you, those last 3.5 felt more like 16 miles.  The 25-mile marker was way off.  So, by the time we got to the 26-mile marker it was about ½ mile off.  For a small race there was a quite a bit of crowd support on the bike path.

Finally, we got to the finish!  Kim grabbed my hand and ran with our arms up as we crossed the finish line.  I was never so happy to finish a race!  We shuffled into the ballroom and grabbed our warm clothes.  They had warm soup and Smuttynose beer for the finishers.  I was too cold to drink my beer!

We had to get the shuttle back to the industrial park.  I was beyond cold.  When we finally got back to the car I turned on my seat warmer and blasted the heat.  I swear it took 24 hours to get my core temperature back!

Would I run this race again?  Probably not.  I would do the half marathon but running the 2 loops to me was mentally challenging.  Now onto NYC! 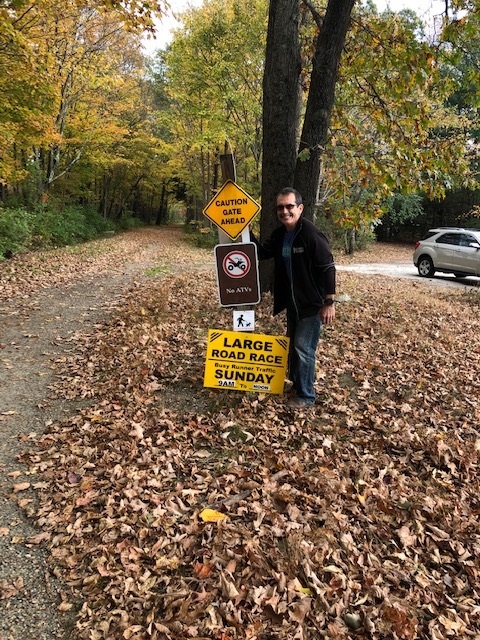 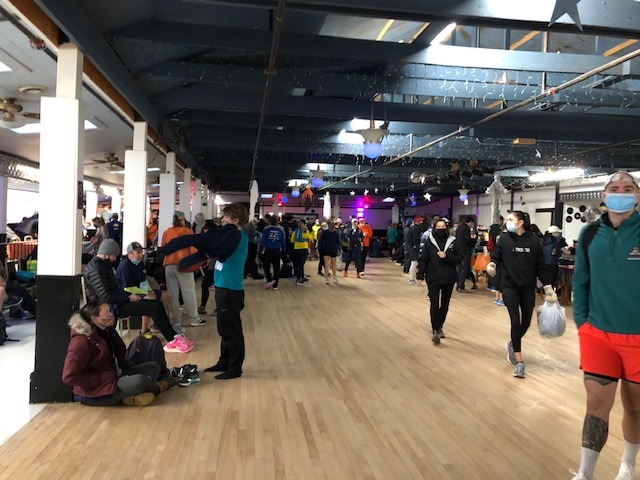 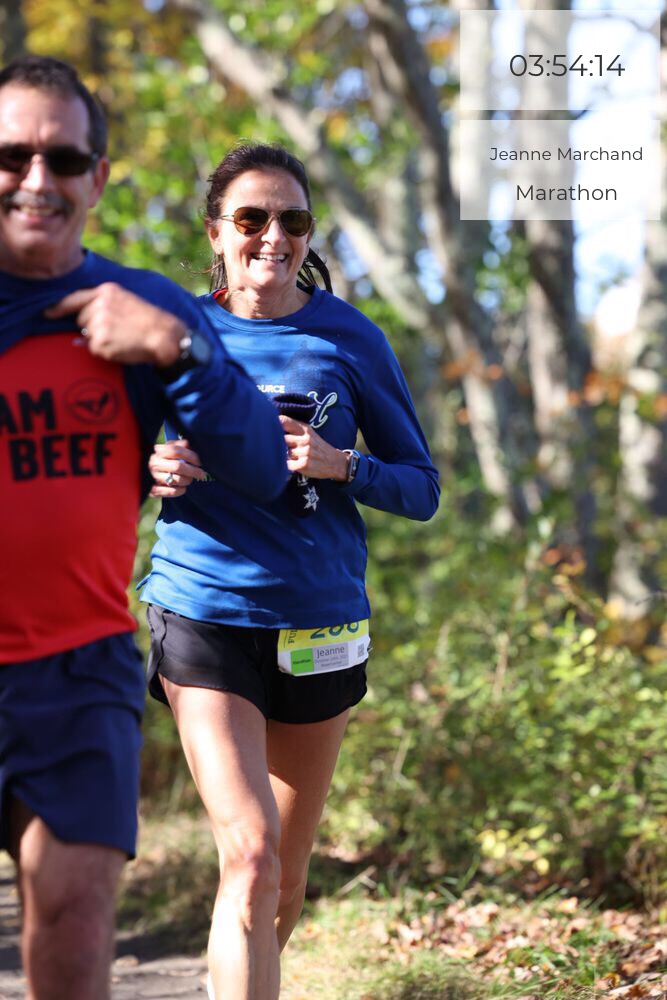