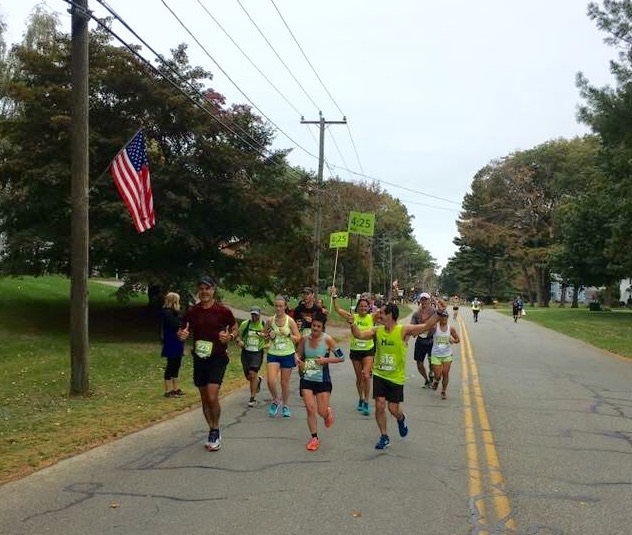 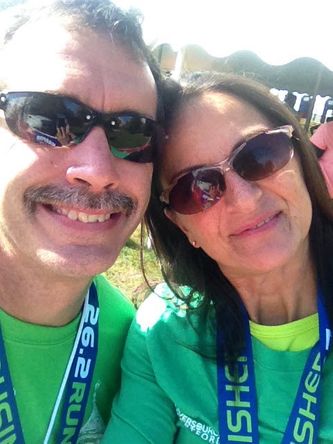 Although I've run this marathon a few times I still get those "first time" jitters when I get to Bushnell Park the morning of the race.  This is the 4th time that I’ve run the marathon as a pace leader.  There were 2 times that I paced the 4:45 group and one time for the 4:30.  This was the first time I paced the 4:25 group.  I used to say that the 4:45 were the most memorable races since these runners were made up of mostly first timers.  I was pleasantly surprised that this 4:25 group had a high percentage of first timers as well.  The group was about 30+ runners in our pace group in the beginning of the race.  I know from my experience that I like to have a pace leader to keep me in check from going out too fast which is something that I’ve done too many times in the past and regretted it.  I think a lot of these runners were using this same strategy as the group thinned out as our miles increased.

The weather forecast was overcast with 90% humidity.  I was glad that I was not racing this one.  I felt bad for so many runners that I knew that were using this race to BQ or were hoping for a PR.  I made sure that I had enough salt pills on me just in case some of the runners didn’t have any and started to cramp.

The race starts at the State Capital.  The excitement and enthusiasm is so thick you can cut it!  The National Anthem was sung by a gentlemen whose voice had such beautiful tones it gave me goosebumps.  I always make a point of singing along to the National Anthem and closing my eyes because it makes me cry.  I love to take it all in and cherish every second of these moments.  The next thing the horn goes off and the race starts.  We slowly move our way to the starting mat with the crowd of runners.

Finally we start running. The first 6 miles went by in a blink.  As we got to know our runners and conversations began the miles started to go by quickly.  We started running through the streets in downtown Hartford, past the first Fire Station and headed towards Riverside Park.  I love running down by the riverfront.  It’s a narrow path but it’s never clustered with runners trying to pass each other out.  We head towards the Colt building up a "slight incline" and then we get spit back out onto the streets of  Hartford running by Bob Steele Road, Infinity Hall and the new UCONN campus addition.  We finally head out over Founders Bridge which I also refer to as the next incline.  We weave our way through and then we end up on the other side of the river.  We can look back and see where we just ran. Every time we got to a mile marker we checked the time on the clocks and made sure that we were in sync with where we should be.  Kim made sure he yelled out what the time should be to our runners so they were able to know that we were on check with our goal finishing time of 4:25.

We continued on and headed out of Great River Park onto the entrance ramp of Route 5.  Next, we headed into the section of East Hartford that is the area that is not my favorite.  I always forget there is a slight hill in this section.  There is also minimal crowd support and the roads are a little rough.  Finally, we get out of that section and head onto route 5 and we get to see the leaders coming in.  We cheered on the first 2 men that were in the lead.  Next we start our gradual accent towards South Windsor.  I love this part!

The houses are beautiful and the crowd support starts to thicken.  There are a few relay checkpoints where the cheering for our 4:25 pace group roars. The road had a turnaround at mile 17 so we start to see the runners in the faster paces come by.   Now the fun starts where Kim and I being to look for our runners that we’ve coached all summer.  Picking out who should be coming by first and cheering them on!

Our group kept saying that they can’t wait for us to get to the turn around.

Finally!  We hit the turnaround.  This other side of the street was pretty funny.  I remember a guy trying to get us to drink a beer and then on the next corner was a police officer.  I said “Is that legal?” to the officer and he just looked at me and smiled.

Kim kept telling his running stories trying to distract the runners as we started to approach the higher miles.  I had a few with me that were starting to fade.  I said “did you know that if you sing the Ant’s go marching one by one 2 times through it’s a mile?  I can sing it to you – there are 2 versions, the clean and the slightly dirty version, which one would you like”?  It was unanimous “Dirty version please”.  So I sang for a while, people were cracking up with this version, then a few more water stops I noticed the runners were again starting to fade.  My next trick to distract the runners was to have them tell me 3 things about their kids that make them laugh, 3 things that their kids do that make them angry, what made them decide to run a marathon and just about anything to keep them engaged.  I sang the ant song again, followed by the song “It’s all about the base – which I change the words to – It’s all about the pace”.  Then like a mirage, there it was…..the 22.5 mile Candy stop!!!  I had been telling the runners that I was so excited to have snickers and that it’s the one time to be able to have guilt free chocolate!  I told them that I am totally stuffing at least 4 snickers into each of my cheeks” Again, laughter and then it started to get quiet. I said to the first time marathoner “Do you have a 4 mile route at home that your run?  He said “yes” I said “Can you run that in your sleep?  and he said “yes” I then said “well, that’s all you have to do to finish this marathon is to run that route in your sleep”!

We are now heading back into my least favorite area, crossing the railroad tracks on Prospect Street and then finally -  we are back out on route 5.  Now we finally turn onto Pitkins Street.  Sarah in our group was running her first marathon, so at the water stops I started yelling “This is Sarah’s first marathon!”  There was a lot of cheering for her – pretty cool.   Sarah and I started to play the game that I do when I just want to finish.  Picking something in the distance to run towards and then when we got there we would switch and select something else like a street sign or telephone pole.  We finally made our way to the top of Founders Bridge and spotted photographers.  I yelled “Photographer ahead – smile, suck in your gut, put your arms  over your head and yell "WHOOO” so they all did and then as soon we passed the photographers, I yelled “okay – photographer is gone you can put your arms down".  As we headed to the bottom of the bridge I said to the runners "This is it!  We are going to be heading into the finish line – today will be the day that you ran your first marathon!  Let’s get it done"!

Suddenly their pace picked up!  The runners were so excited!  We saw other runners walking,  as we passed and I screamed at them “Come on!  The finish is around the corner - you got this!” then, they’d start running again.  We turned the corner to that beautiful iconic landmark – the arches of Bushnell Park.   So many people cheering!  The mums lining the street, the smells of October, that exhilarating feeling of the finish that that was so close that I could taste it.  Goosebumps are covering my body as Kim grabbed my hand and we held our pacer signs up high and start to cross the finish line.  The announcers were saying on the loud speakers “here comes the 4:25 pacers. Wow - Right on the money – it doesn’t get any better than that”.  We crossed at 4:25:06 (gun time).

Amazing.  Speechless.  I hugged our runners as they cried with enthusiasm.  Something that I’ll never forget.  We got our medals and headed to the party in the park.  The hugs, the smiles, the endorphins just filling the air.  I love this part.  The massages, food, beer garden and then comes that bittersweet feeling I get as we drive home.  It’s over! When can I sign up to pace for next year’s race?!

I love the Hartford Marathon!  It’s not one of the big city races like Chicago, NYC or Boston, but it’s so special to me in so many ways.  It’s where I Boston Qualified for the first time. It's where I can go to Bushnell Park and see so many of my friends to celebrate.  It’s a big park that feels like a small community of support where we all share the same thing - our love for running.