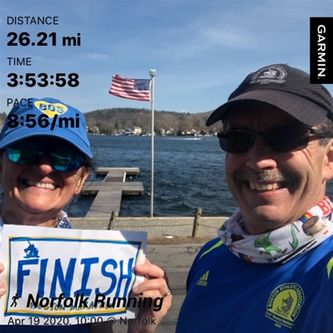 The day’s leading up to the originally scheduled  Boston Marathon have been bittersweet.  At first, I was not bothered that I wasn’t running the marathon, and my focus was not being upset that so many races were canceled but more on just wanting our lives to go back to the way they used to be.  It’s amazing how resilient we all are and how we are all adapting to a new world of social distancing.  Don’t get me wrong, I have my moments of fear and doubt.  Yesterday was one of those dark days.  I was miserable and had no ambition to do anything.  Kim and I had been talking about running a virtual Boston.  Then my friend Fernanda tagged me in an inspirational post on Facebook about running a “Backyard Boston Marathon”.  It stirred up some ideas about how we could make our virtual Boston marathon similar by creating signs of the different mile markers and milestones.  So that night I pulled out my markers and created the signs with Kim’s input.  Later that evening, we took a ride to put some nutrition on the course and make sure we had water stashed.  As we drove the route, I couldn’t help noticing that it was not at all downhill (as Kim promised) and there were some impressive up hills.  Kim’s replied with one of his famous hill comments “Don’t worry, the hill will flatten out when you get to it”.   I know from past experiences that this is something that only works for him.

We woke up the next day and posted on a few group pages of our adventure and headed up to Norfolk.  I was thinking on the way to Norfolk, wow not having the stress of getting in line for the bathroom or nervous about having the right clothes was alleviated.  I was much calmer than any other marathon, although I was dreading Kim’s route.  He tried to pacify me by saying we have a net downhill, but from experience,  Norfolk is tough.

It was supposed to be in the 60’s and I was getting ready putting on my shorts and tank top.  Kim looked at me and said “You’d better go outside and do a temperature check, it’s a lot cooler than we expected. I changed and layered up so I could peel some clothes off if I warmed up.  When we got to Norfolk, it was  much cooler there than I anticipated, hence Norfolk’s name, “The Icebox of CT”.  I ended up putting on my jacket and walked to our “start line”.  Kim said we have 2 minutes to start so I immediately  put my hand on my heart and belted out “The Star-Spangled Banner”.  We did the count down, 10, 9, 8, 7, 6, 5, 4, 3, 2, and then I made my “horn” noise and we started laughing and started running.  We ran our first 6 miles in the higher elevations, dropped clothes off at the car and refueled.  We made sure we took photos of “Entering Ashland” and “Entering Framingham” during those sections.  We headed down to the Center of Norfolk and ran by our friend Margaret’s house.  It happened to be at mile 10 and we were planning to take a photo there for the next mile marker for “Entering Natick”.  Keep in mind, I haven’t seen her in quite some time, so I choked back tears as we talked with our 6 feet between us.  Then her twin sister Mary pulled in her driveway, and the tears started again.  We left there and headed to the next section that is very challenging.  If you’ve ever run the Norfolk 5 miler, you’ll know exactly where the dirt road is around mile 3, with an extreme climb out to route 272.  We started up the dirt road and I saw my friend Diane’s car.  She mentioned she was coming out to cheer us on.  I was beyond excited to see her and started to cry.  She had made some pretty awesome signs and she was standing in her car with her entire body sticking out her sunroof cheering for us (wearing a face mask, of course).   Diane has volunteered at the NYC marathon at mile 25 and I have to say seeing her was pretty much the same feeling of gratitude at mile 13!   We chatted a bit and headed out to the next horrible section; up Route 272 past Dennis Hill to Bruey Road.  Kim grew up on Bruey road and had some correspondence with Michael Lo Presti who had recently moved there.  Kim told him when we’d be running by around mile 15.  We approached the first dreaded hill that Kim promised would flatten out.  He lied.  This hill was so steep that I felt like my nose was going to touch the payment.  We crested the top and headed toward Michael’s house.  We could hear cowbells and I thought it must be Michael.  It was his neighbor!  She was standing out on the road cheering for us!  I could hear someone cheering from their house on the left.  She said, “Are you Kim and Jeanne”? and we said “Yes”!  We thanked her and ran past her and to the next house where a couple was outside with cowbells and were cheering us on.  The guy was talking to us with a Boston accent saying, “That hill is wicked hard” and we thanked them and kept running.  I had to choke back tears again.  Then we could hear music ahead and we could see what looked like a water stop!  There was a table with bananas and water and snacks for us.  Michael’s wife and daughters were outside cheering.  I have to say, I was having a moment.  I refer to these as “mental snapshots” where it was something that I never wanted to ever forget.  How cool was it that Michael, who recently moved to his neighborhood was able to get his street to support us crazy runners?  He’s a pretty awesome guy!  We stayed and chatted, and Kim told them about growing up on Bruey road.  His grandfather owned the old Breezy Hill farm and a large amount of land there. We started to get cold and started to run again.  We headed to our next mile marker “17 – Newton”.  After we took the photo I said, “oh look Kim, it’s reversed like looking into a mirror”.  Kim said “wow, that’s weird, the rest of them weren’t like that”.  Then I realized, I had the picture upside down.  I think I may have started to get tired!  We cracked up and took the photo again and headed up over Rigby hill to Winchester Center.  This section was compiled with quite a bit of uphill climbs.  Finally, we were heading to the next mile marker “Heart Break Hill”.

As we passed through Winchester Center at mile 20, I looked up ahead and saw Diane’s car again.  I also noticed a white car behind her and Suzy standing on a stone wall with a Boston Strong sign.  Yes, it happened again, I started crying.  OMG – to see her face was priceless.  Diane pulled out new signs that were hysterical.  “You’re almost there” and one just for Kim “Only One more hill”  We stayed and chatted for a while and headed out.  I can’t tell you how special it was to see my friends.  If I write anymore, I’ll start crying again!

We started back out for the last 6 miles to get home.  We got to the next mile marker “23 Entering Brookline”.  We were so close!  We were finally back on the lake; familiar territory!  I knew there was only one set of hills left and then it was pretty much flat to the finish.  We reached the next mile marker and I pulled out the next sign “Entering Boston” that included a picture of the Citgo sign.   Now I was smiling!  We started running and then got to the next “mile marker “25.5 – the corner of Hereford and Boylston”.  We took out our last photo and headed to the finish!  We kept pushing and finished right past the house.  I pulled out the finish line picture and we took our last photo.  It was freaking awesome.  I BQ’s with a 3:53 time and also……wait for it…. I was the first female finisher of our very own Backyard Boston Marathon.  Today’s adventure totally put me back into a mindset that we will get through this!  It’s so clear to me that people are kind and their friendship is so special; these things we should never take for granted.  This may not have been the actual “Boston Marathon”,   but the experience is something that I will never forget as it has given me back something that I’ll never give up on  - “Hope” 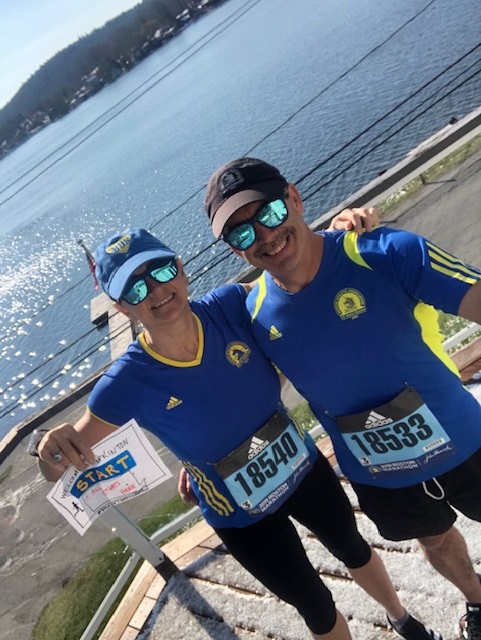 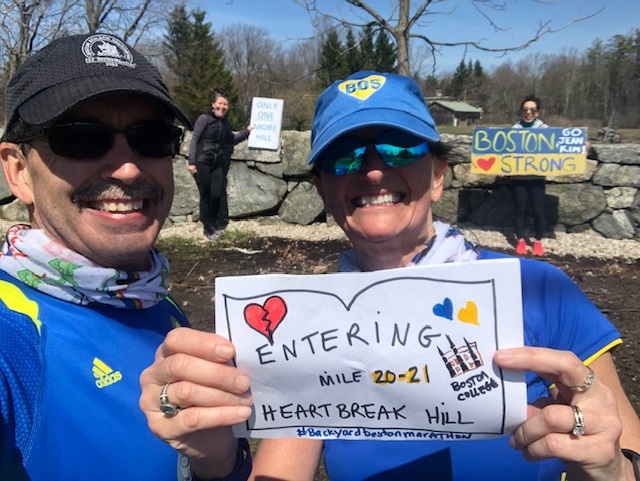 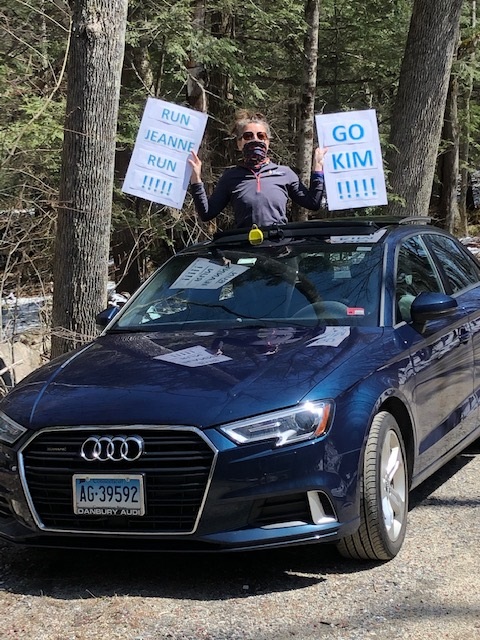 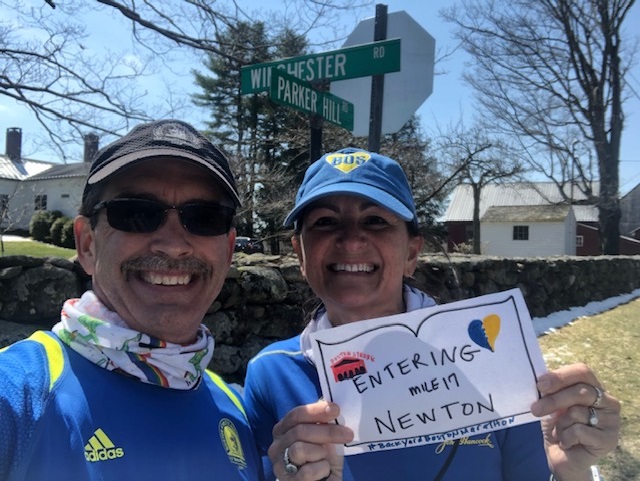 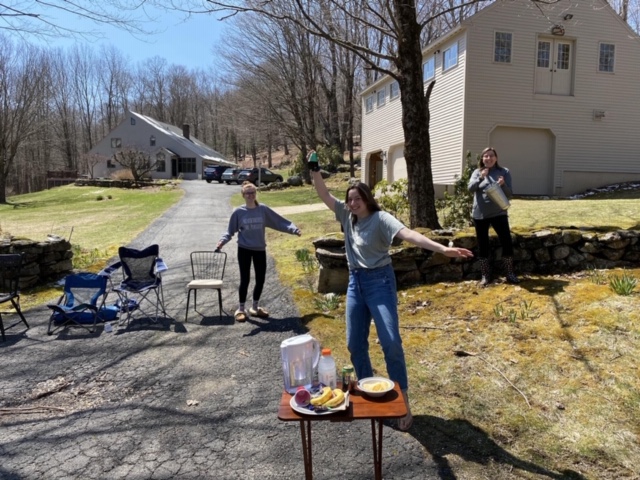 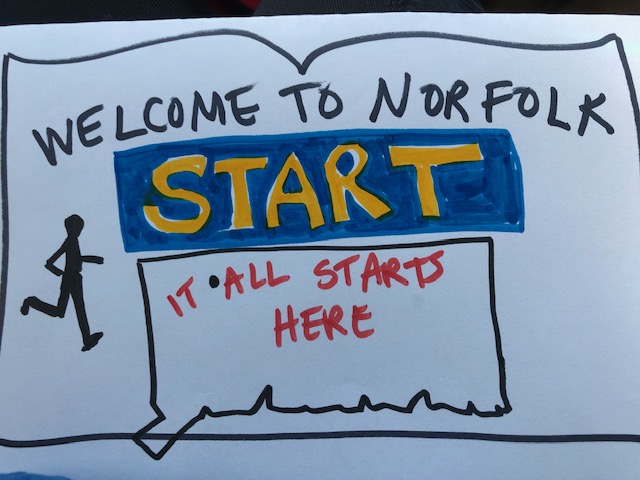 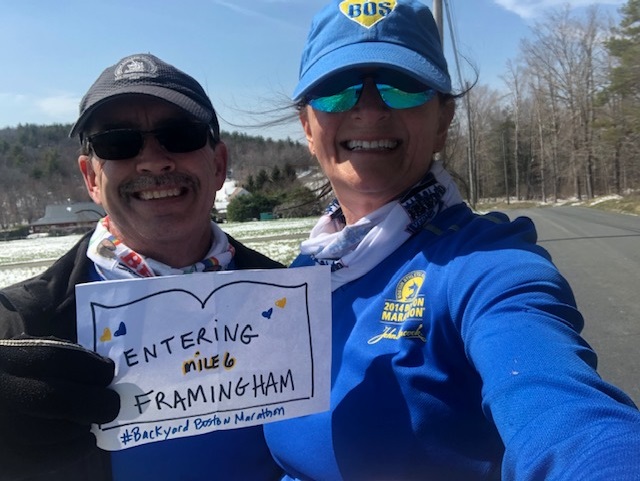 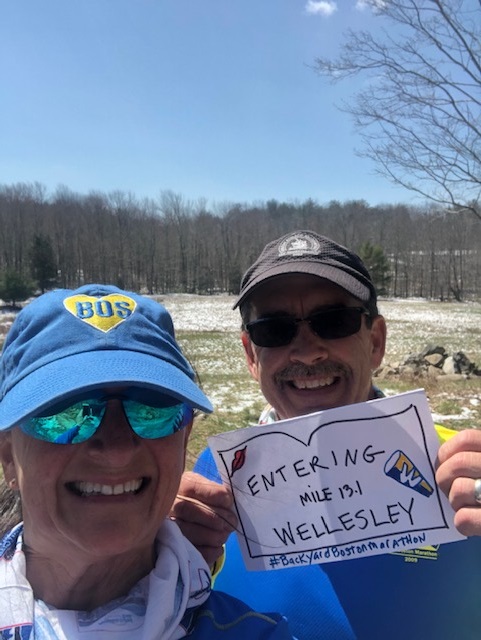 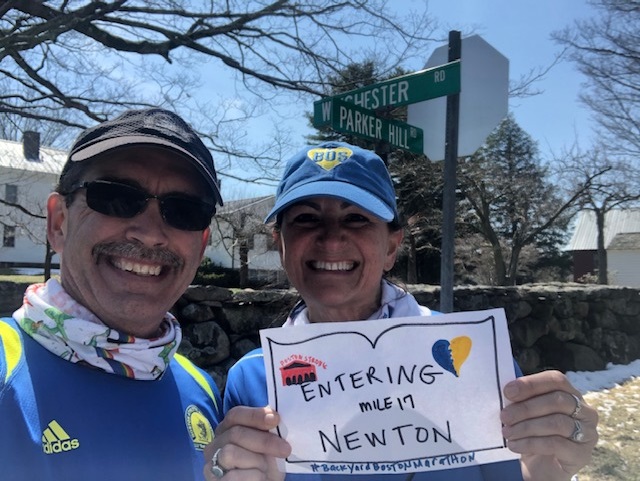 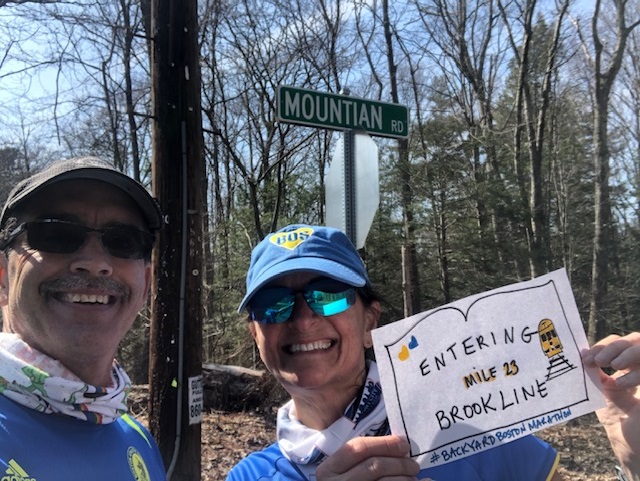 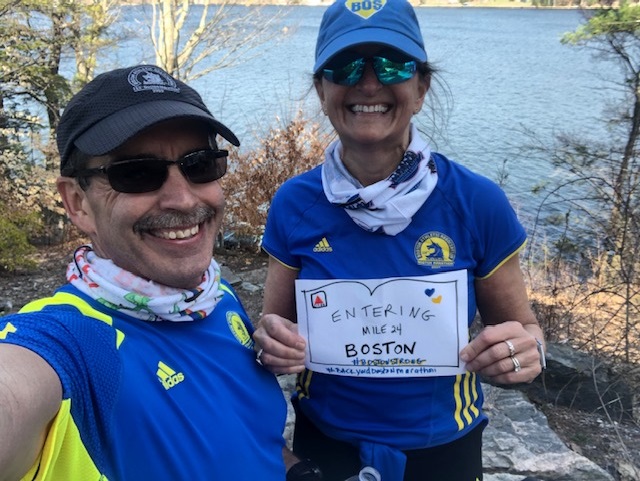 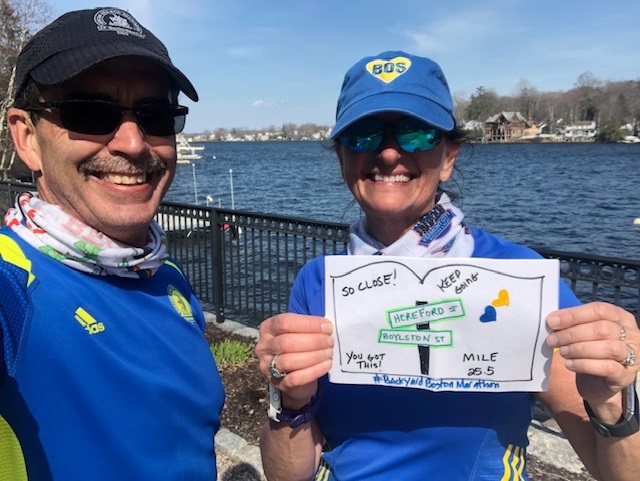 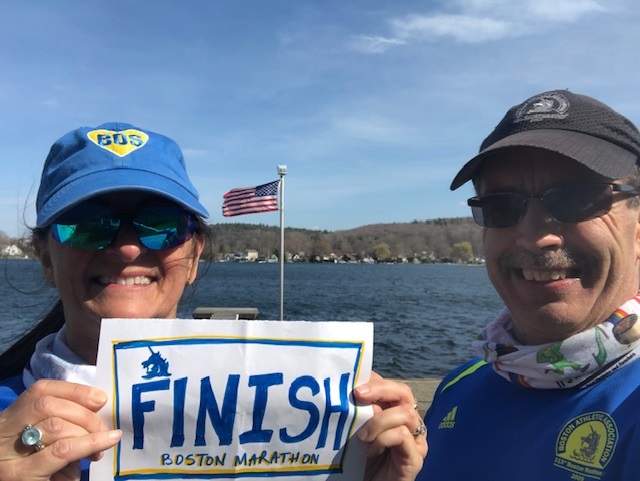