For Christmas Kim gave me a personalized marathon ornament.  It’s in the shape of a race bib with Daufuskie Island Marathon written on the front.  It included my time, bib number from last year’s race and “I love this marathon” which is something that he heard me say many times after the race.  Since the marathon was only a couple weeks after Christmas, the ornament made me pretty excited to go back to run it again for my Birthday Marathon Weekend!

We flew into Savannah where we planned on exploring the last day of our trip there since we had a late flight.  We left the airport to drive to bib pick up.  They had bib pick up at a local running store in GA.  Kerry, the race director was there and greeted us.  Last year they were short Kim’s size in the sweatshirts they had for race swag.  They were supposed to mail it, but Kim never got it.  He did however get a pullover mailed to him to hold him over until he received it.  Kim asked Kerry if she had the swearshirt and she apologized and promised Kim he’d get it race morning.  This year instead of the sweatshirt we got a nice duffle bag with the race logo on it.  We had been up since 3:15 am to get our fight so we were starving.  Kerry suggested The Green Truck in Savannah for the best burgers.  We took her advice and drove into downtown Savannah. Oh, and Kerry was right, the burgers were FANTASTIC.

Next up was our drive to Hilton Head.  We were staying at the Grand Ocean Marriott Hilton Head resort. The location was perfect.  The resort was incredible.  We had a 2-bedroom villa with a full kitchen, laundry room, 2 full baths and another pullout sofa in the living room and it was on the ocean and the price was pretty good since it was their “off-season.  We also had the bonus of waking up to the most beautiful sunrises on the ocean.

Pre-Race meal.  We ate at Pomadori an authentic Italian restaurant that had excellent homemade pasta!  I highly recommend this restaurant if you ever want an authentic homemade Italian meal.  The grandfather was sitting at the bar behind us with his grandson Miles.  He mentioned to us that he made the raviolis that were on the dinner menu.  After dinner, Kim surprised me with a piece of chocolate expresso cake with a side gelato and a birthday candle.  It was delicious!

Race Morning:  This year we were much closer to the start than last year’s 2-hour drive to catch the ferry from Haig Point.  The drive was less than 10 minutes.  There was also a cold snap that started race morning.  It was windy and FREEZING. Temperatures were in the low 30’s but with the wind it felt much colder.  I was wearing shorts, tank-top, sleeves, gloves and I brought a few throw-away items.  We got on the ferry to warm up for our 30-minute ride to Daufuskie Island.  As we walked off the ferry to the island, we were treated with yet another amazing sunrise.  We headed over to the “heated” tents.  The heat source were large propane heaters.  Last year it was enough to keep us warm but this year we had wind. The tent had secured large plastic curtains to block the wind, but it wasn’t enough.  We all made new friends and stood around the heaters trying not to burn our eyelashes! We had 1 ½ hours to wait until the start.  Another perk for this race is they provided us runners with hot coffee and fresh cinnamon buns.

Why do I always have to go the bathroom 5 minutes before the start?  It seems to be a trend for me!  I ran to the port-o-let and took off my throw-away PJ bottoms in the port-to-let.  I ran back to Kim, and he took those bottoms and tied them to his check bag.  We headed over to the start and stood in the sun trying to warm up.  I still had on my thermal white pajama top to keep warm.  I also had my HMF buff and had warmers in my gloves.  I was shivering!  Finally, they sang the National Anthem.  I closed my eyes and prayed for the best.

The start:  Finally, the start horn sounded us off and we started running.  It was very congested even for a small race.  We weaved around runners on what reminded me of “The Yellow Brick Road” sidewalk until we finally settled into a comfortable pace onto the pavement.  We ran almost 2 miles when we approached the first section of dirt road.  I had ditched my white PJ top around mile 2 and was finally able to feel my frozen toes come to life.

This year the dirt road wasn’t as sandy as last year which made for a very pleasant terrain.  Whenever we switched from the tar to the dirt, I sort of felt like “ahhh” this feels nice.  It was very forgiving.

Our pace kept creeping up a little faster each mile.  I’d yell out to Kim “That was 8:23”, let’s slow down.  So, we’d slow down only to find the next mile was even faster.  I felt fantastic!  I remember saying to Kim, “I feel like we have been running downhill for a long time.  The first 8 miles were a combination of pavement, then dirt road and back to pavement to the water stops.   There was a water stop in the center of what I called the clover of 3 loops.  The water was for each of those sections; mile 3.5, then 6 and then 9.  Then we were headed back to the start area.  We run out into a neighborhood section with the only 2 small hills that were little bridges.  Then we are spit out to the ocean side.  I started to get cold, then I’d warm-up a bit only to get a blast of wind and get cold again. This section was quite windy.  The course is on a dirt, sort of crushed seashell terrain.  It’s quite lovely.

We weaved our way back to the starting area for our second loop.  We ran through the start line, and everyone cheered for us.  I prayed the 2nd time around would be as forgiving.

On the second loop the horses were finally outside.  They must have been too cold during the first loop.  I find the second loop wasn’t mentally exhausting as some 2 loop races because there was something new to look at.  I made sure every mile we both ate Scratch chews so we wouldn’t hit the wall.  We started to take salt around mile 17, then again at 21.  The only thing that I can say that this race needs is one more water stop.  They were good about suggesting to runners’ multiple times on the website, emails and social media to carry your own water and are very clear the amount of water stops.  I didn’t want to carry a handheld.  I never had any issues other than at around mile 23 my mouth was dry from the chews and salt that would just sit in my cheek and not dissolve.

We were still on a consistent steady pace and were heading into the last 2 miles.  Kim said “Jeanne, I’m Boston Qualifying today”.  I thought, “oh shit, I can’t slow down now, thinking his time he needed was 3:45.  So I sucked it up and put my head down and did what I do best to keep my mind occupied.  I sang the “Ant Song” in my head. We got to the last water stop on the ocean side and I stopped for a second to grab the Roctane and my foot started to cramp up.  Kim said, “just shake it out”, so I kept going.  The cramps started in both my quads.  I put my head down and continued with the Ant Song.  Ugh.  I just said to myself, “keep going, Kim want’s to BQ today”, so I sucked it up and kept moving forward.

Finally, we were approaching the finish line.  I took off my long sleeve shirt so my race photos would show my race number that I had pinned on my tank top.  At that point, there wasn’t much left in my tank to yell to Kim to do the same. He turned and noticed my tank was on, so he ripped his long sleeve off right before we finished.  He grabbed my hand, and we crossed the finish line.  He was yelling “Its her birthday today”.  They wished me a happy birthday and I started to walk to get our gear check to put on some warm clothes.

We stopped at the free metal engraving after and gave them our info.  The guy said, “you placed 2nd in your division.  Ugh, I said “2nd doesn’t give you that sweet trofie, only if you place 1st in the division”.  I’m at the older side of this age division, 50-59.  Some young 51-year-old wiper-snapper won.  All I could think was, “wait till next year when I’m 60”!

We got to the food tent and met up with our good friend Sharon Reiner who move to Hilton Head.  LUCKY!!!  We chatted, got our food and headed back to the ferry because we were just freezing.

The next morning, we did what any smart runner would do, we signed up for next year. I AM going to get that 1st place in my new division!

Later that night, I opened my registration confirmation and Kim noticed it had 59 for my race day age.  The race is on January 13th, which is one day BEFORE I turn 60.  Ugh, I guess I’ll be running in 2024 again.

I love this race.  Like I said in so many posts, it’s a hidden treasure.  It’s beautiful. The course is flat and forgiving, the swag rocks, there are FREE race photos, the best POST race celebration on white linen, and the race director is amazing. We ran into her at the bottomless mimosa brunch the next day.  She immediately recognized us and gave me a happy birthday hug!  She said, “what can I do to make this race better”?  That says a lot right there!  Can’t wait for next year’s Birthday marathon! 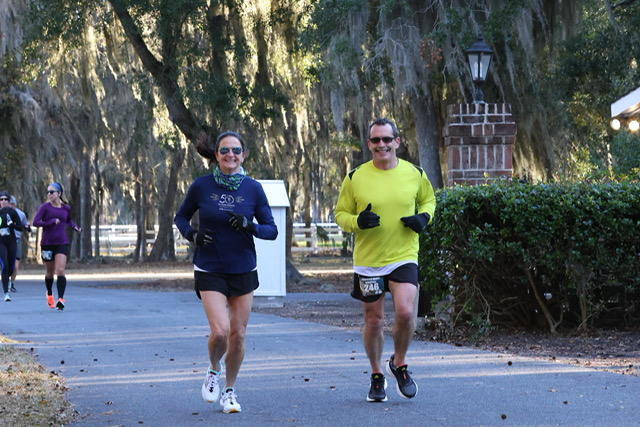 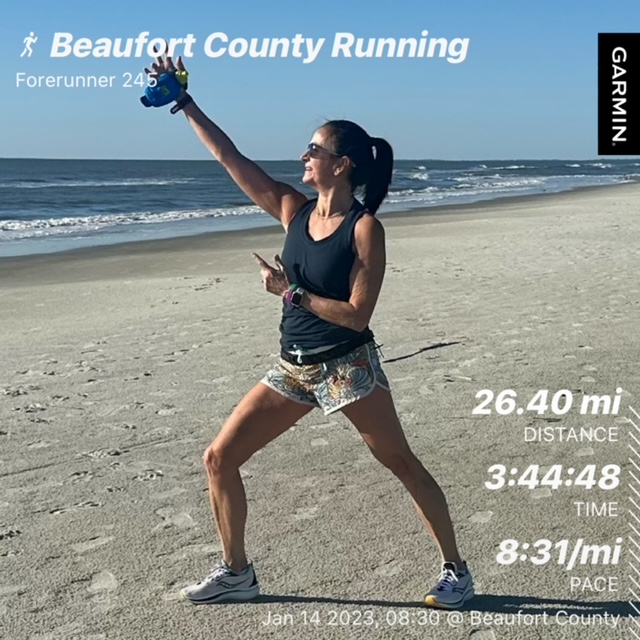 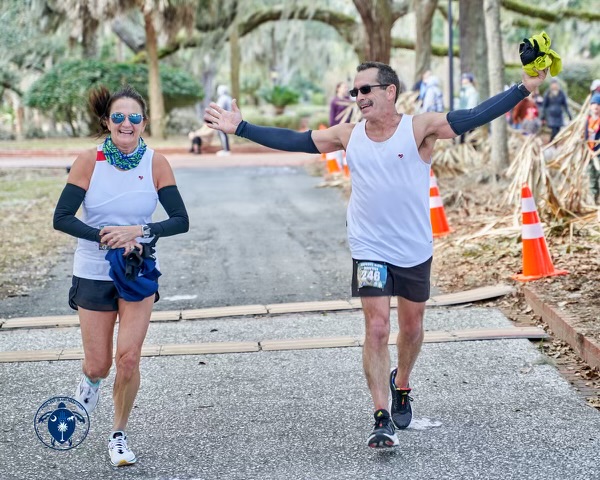 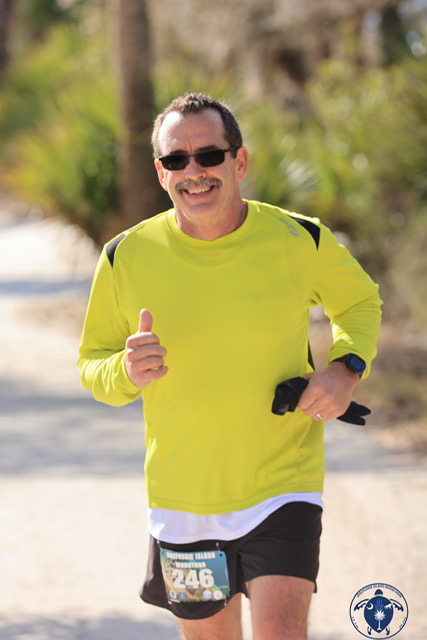 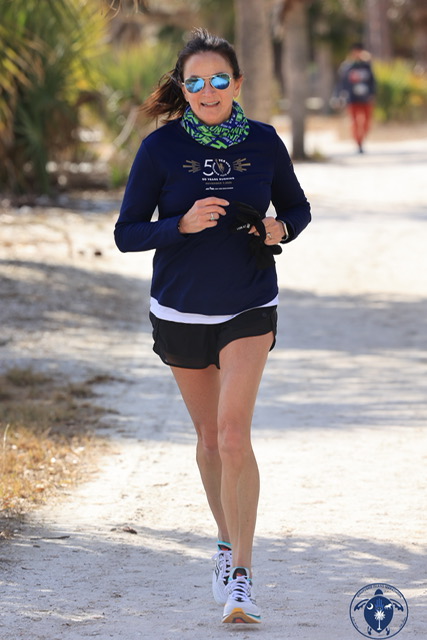 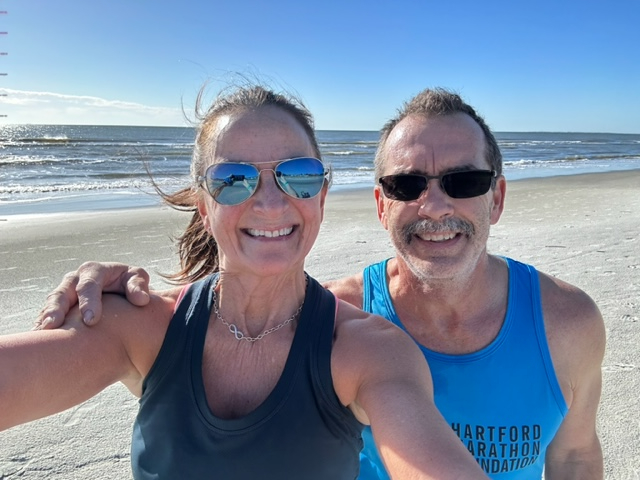 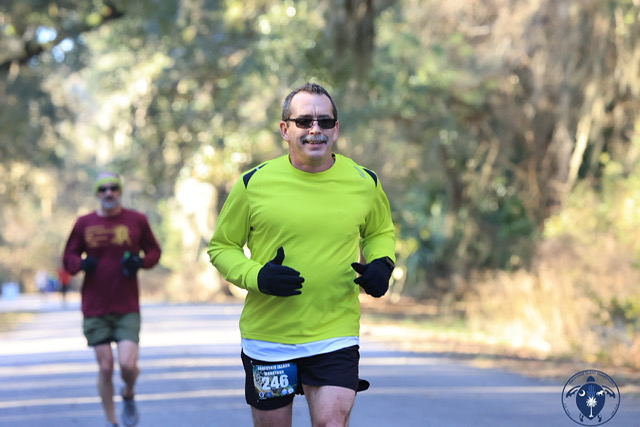 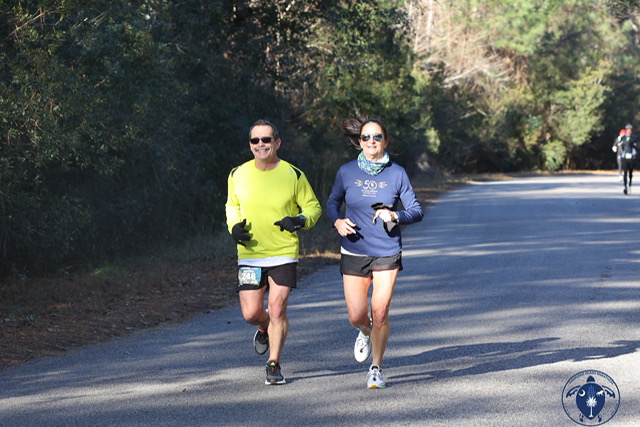 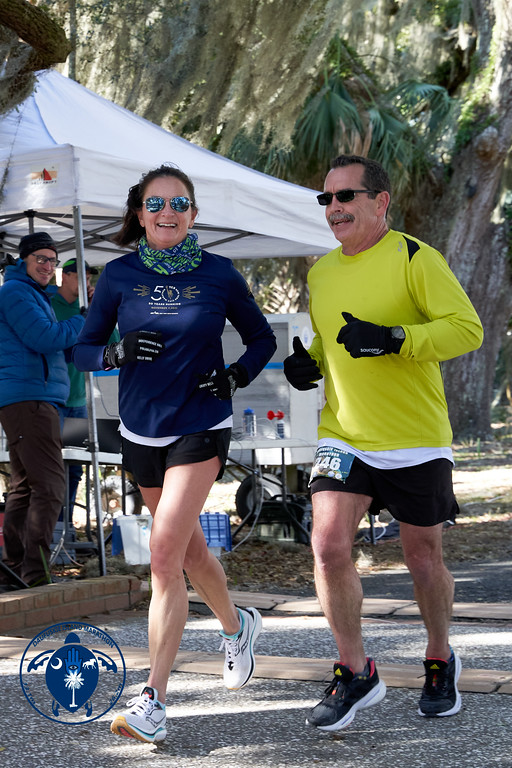