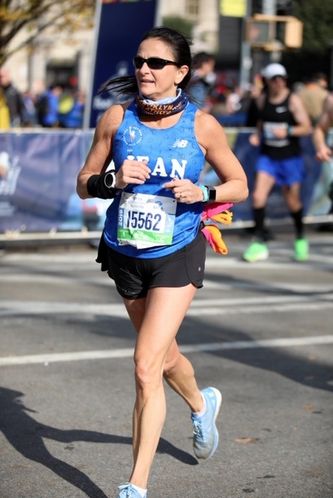 I LOVE New York City.  Having any excuse to go to NYC is awesome, but throwing in the NYC marathon just makes it epic.

We took the train to NYC Saturday morning.  Last year when we drove to the train station it was pouring rain and horrible blinding driving conditions.  This year, not so much.  We got to the train station with plenty of time to spare.  The train was even 10 minutes late so we were able to relax a bit.  We arrived at Grand Central relatively early with good intentions to run in Central Park before the expo but I failed to bring running tights.  It was pretty chilly out so we opted to just drop our bags at the hotel and head to the expo.

This year, we were surprised there were no metal detectors or security before you walked into the expo.  In previous years, there was a lot more police presence. They even had military standing outside the Javit's center with guns and police dogs.  Nothing this year, so the lines to get in were minimal.  When we got to the bib pick up we immediately bumped into our friend Doug Benedetto (#nomeatathlete) from CT. 🙂  We got our bibs, t shirt, took photos  and headed into the New Balance retail section. I didn’t see anything that “wowed” me this year which is a relief because it could get pricey.  We exited the retail section and headed down the first row of vendors.  We ran into so many familiar faces. I even recognized one of the San Francisco ambassadors Almi, who is expecting a baby next month.  She ran the 52.4 ultra-marathon this past July at the San Francisco marathon when she wasn’t even showing yet and now she’s running the marathon! She’s incredible!

We weaved our way through the different booths, trying honey stinger waffles, UCAN, NUUN, and just tried hard not to consume anything that may upset our tummies for race day.  We ran into our friend John Williams who was running for “Race for Chase”.  We were starting to get hungry so we all headed out to get some lunch.  We were walking out of the expo and our new friend Michelle came up to behind me and said “OMG – do I only see you two in NYC”?  We met her in the elevator the last time we were in NYC when she recognized our Hartford Marathon jackets and said, “Hey are you from CT?” We found out we have a lot of mutual friends and she is also an Achilles guide. We took a selfie and parted ways.

We ate our pre-race meal at an Italian restaurant and headed back to the hotel for an early night.  The Residence Inn near Bryant Park is nice.  Not only because its less than a block from where we pick up the pre-race bus, but it has a small kitchen with dishes, refrigerator, coffee maker and utensils.  The only complaint is the coffee was absolutely horrible.

We got our race gear together, put on our numbers, made peanut butter & jelly sandwiches and headed to bed setting the alarm for 4:30 am.

I had nightmares that I slept late and missed the marathon!  When I woke up I was already nervous!

We got ready and headed to Bryant Park to get the bus. NYC marathon has this process down to a science.  We were directed around a few turns and before we knew it we were on the bus in about 15 minutes.  The bus driver seemed to be driving fast (but if you know me, pretty much anyone drives too fast). I wanted to let him know to slow down a bit but also knew in my heart he would have kicked me off the bus.

We got to athletes’ village and found our Dunkin Donuts hats, coffee, bagel, honey stingers and found a spot near our corral that was sheltered from the wind. We pulled out the heat shields and made camp. I opened my hand warmers and snuggled up close to Kim wondering if I would ever be warm enough to toss my goodwill pants I purchased. There were so many funny outfits we saw: full size bunny outfits, women wearing hats with pineapples on the top, space suits, PJ’s, bathrobes and the list goes on. We all had the same goal; to stay warm!  One thing I did notice that I will have to consider purchasing is the lower back stick-on heating pads.  There was a woman sitting there alone with not a lot on for throw away stuff.  I offered her hand warmers and she said, “I’m fine”.  When it was time to move to the starting line she pulled off the heating pads that resembled large maxi pads.  She said, “I was told to wear these to keep my core warm”.  Great idea for the next cold race!

It was time to move to the starting line.  The cannon kept going off for the wheelchair start and then for the elite men. It scared the crap out of me!  They did have warnings announcing the cannon, but it wouldn’t register in my head to allow time to prepare myself for each "boom".  With only a couple minutes to go, I looked up to the sky to see 2 parachuters.  One had white smoke and the other blue coming out of what looked like their sneakers.  As the woman sang the National anthem, I looked up again to see another parachuter holding the American flag.  It was so cool.  Finally, our cannon went off with a  loud "boom" that I could feel down into my belly and then the traditional Frank Sinatra's “New York, New York” started to play.  We all started to run.  This was the first time since my first NYC that I was in the green corral that runs on the lower level of the Verrazano bridge.  It was epic.  The tug boat in the water had water shooting out in all directions that formed a rainbow.  Helicopters were hoovering so closer you could see their faces.  We ran up and up to the top of the Verrazano bridge and then had our decent down off the bridge.  I remember looking at my watch when mile 2 chimed with a 7:31 pace and I thought, “Oh boy”, it’s time to slow down”.

I remember looking up at the street sign and seeing 100th street.  Every now and again I’d look up again and see the street numbers going down.  Then, I looked ahead and saw a building that resembled a lip stick tube or some “adult toy” and chuckled to myself. 😲 I kept saying to myself, keep running towards that phallic symbol! Funny the things that keep us going!

The cheering on both sides of the street was pretty awesome.  This year Kim put JEAN on my shirt with stick-on lettering.  He was wearing his “TEAM BEEF” shirt.  I heard “GO JEAN”, “WHERE’S THE BEEF” and “GO TEAM BEEF” more times that I could count.  My word of advice for anyone running the NYC; put your name on your shirt.  When you start to crap out, the crowds will start screaming your name, sometimes even chanting it “GO JEAN, JEAN, JEAN, JEAN”.

I tried so hard to remember street signs and sections that I loved the most. I absolutely LOVED running on Lafayette street. The streets in Brooklyn are on the narrow side with some pretty good inclines.  You don’t even notice the inclines because there is so much excitement from the people screaming; the drummers, people dancing, school bands and the BEST live music playing on each street corner. The streets were packed 10 to 15 deep with people. This area was so exhilarating.

Certain things stick out in my mind:  Running over the Queensboro bridge, running through Williamsburg, people trying to cross the street in front of you, crazy outfits, energy, funny signs, people screaming your name, cheering, horns, high fives, cowbells, OMG, I get goosebumps as I write this.

When you read the advertisements about the New York City marathon they say, “It will MOVE you”, let me tell you they are not kidding, I was blown away. This marathon is challenging. The streets are hard, the bridges are endless, the hills in Central Park are total bitch slaps but let me tell you when it’s over and you cross the finish line, there is a feeling of accomplishment like none other.

The volunteers are cheering for you when you finish and congratulating you. The walk to get your warm poncho is endless.  I felt like a Rockstar heading to the subway getting congratulated by total strangers.  The stairs heading down into the subway was horribly painful and then having to walk outside out of the subway when we reached our destination in the bitter cold was a slap in the face.  I just wanted to get to the hotel and get warm!

Finally, we got back to the hotel and I embraced a warm shower. After we cleaned up we met our friends John, Dickson, Fernanda & Marcy for a nice post-race dinner at a very quaint restaurant (Parker & Quinn).  There were so many runners at the restaurant having dinner. They aren’t hard to pick out as we all had the same outfits; NYC marathon shirt with our race medals very proudly displayed. I had my favorite post-race meal; cheeseburger and a glass of wine (cabernet).👍  It was the BEST meal I’ve ever eaten in my life (LOL-anything you eat post marathon is going to be the BEST meal!)

The next morning reality started to set in when we went to breakfast.  I sat there with my race shirt on (again) and some stranger walked up to me and said “Congratulations”.

I just smiled and thought “I love New York” and "I'll be back next year for your 50th Anniversary"!🙂💋 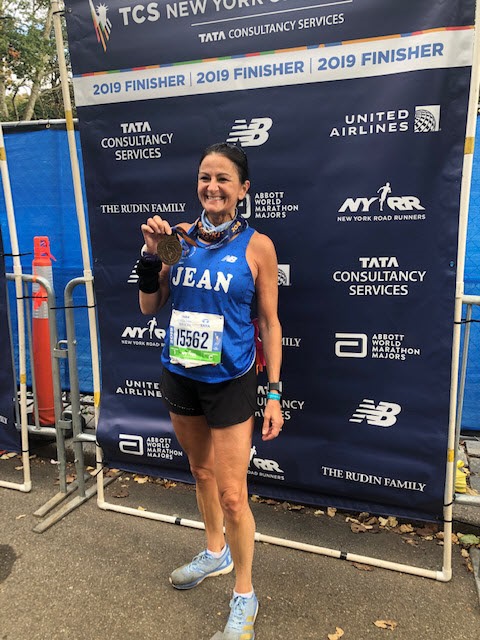 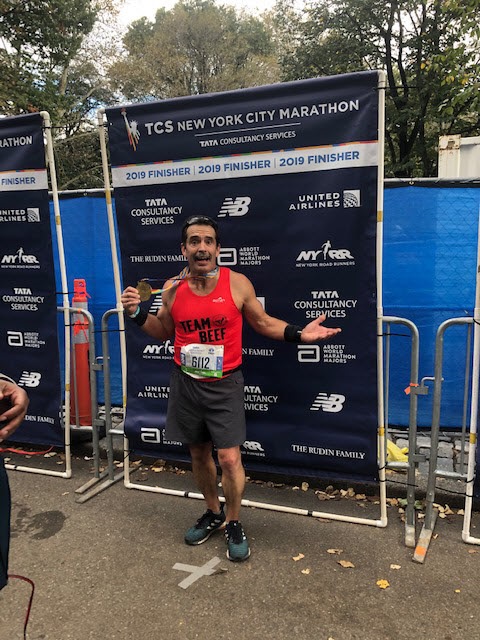 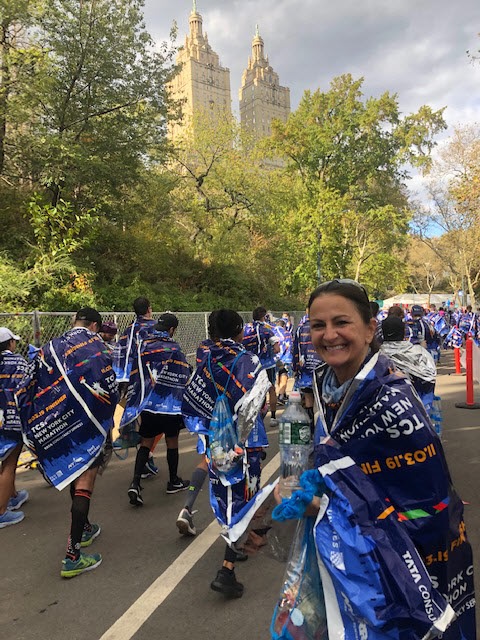 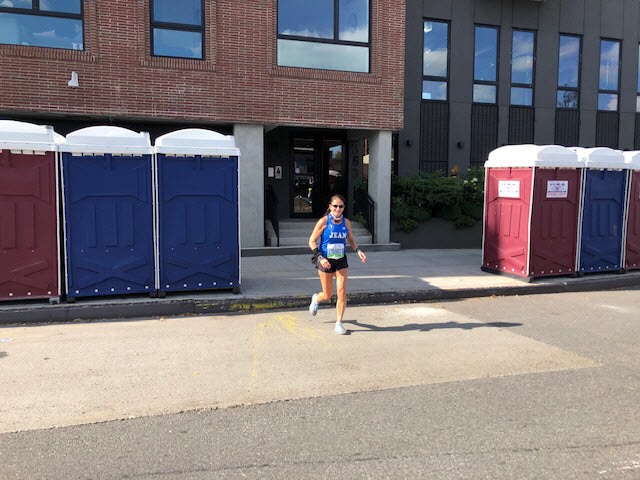 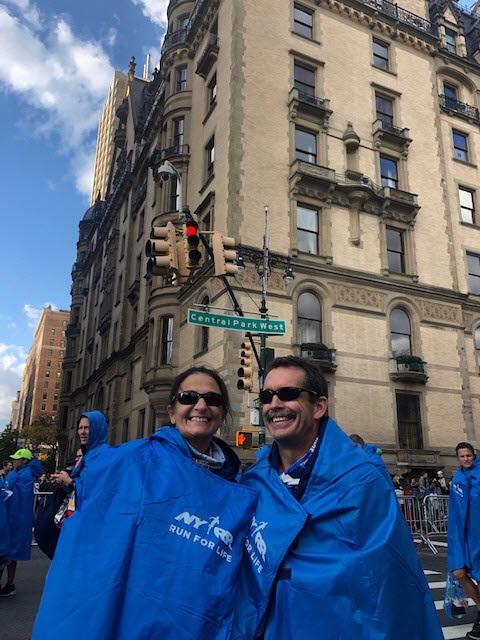 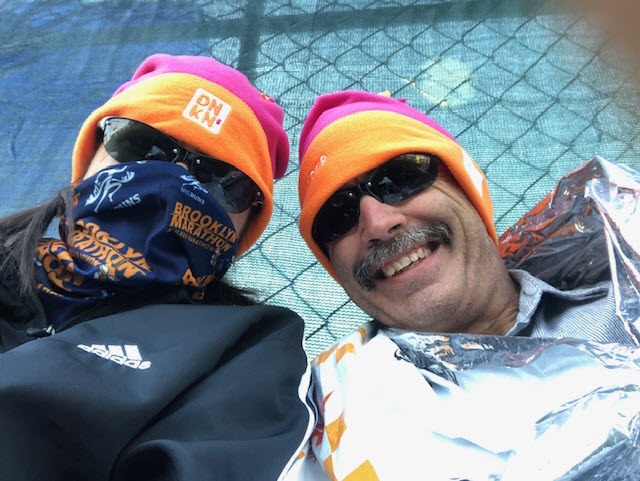 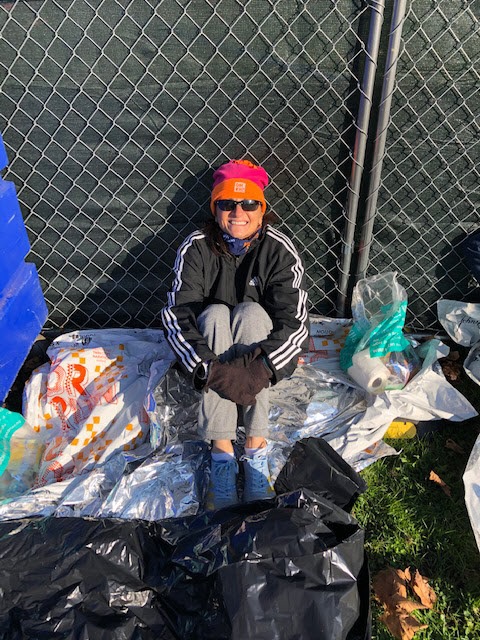 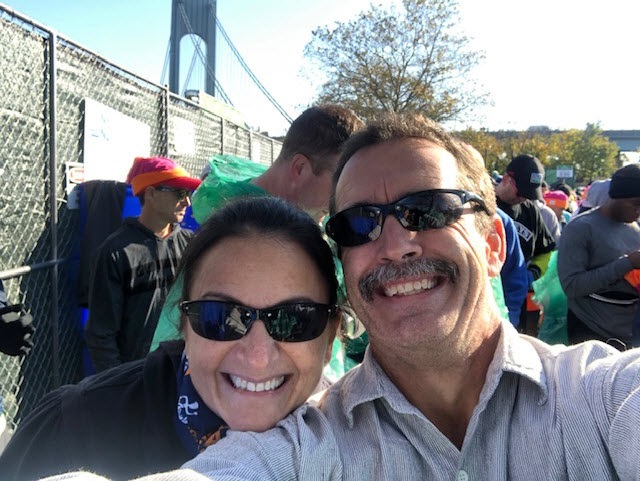 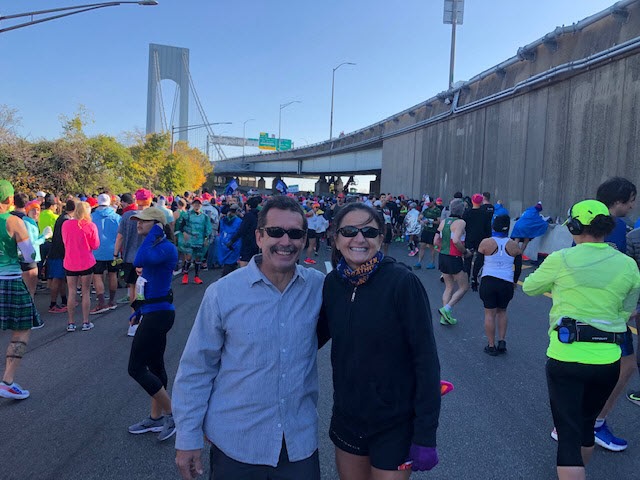 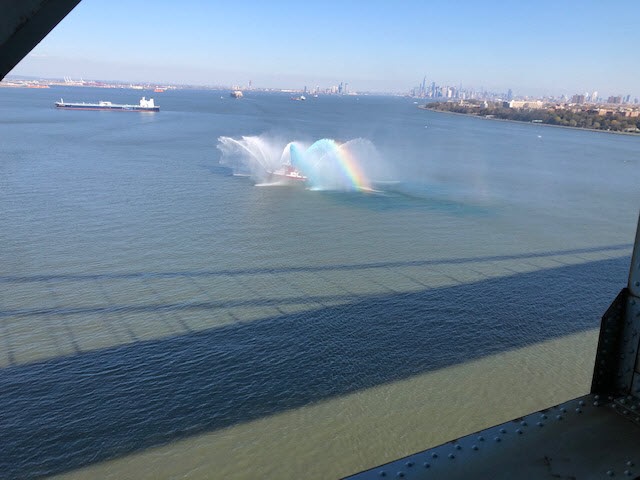