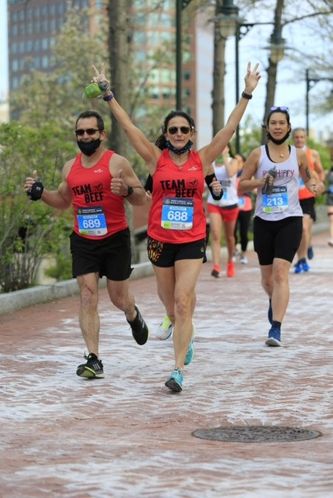 When all my friends (Fleet Feel Kool Kids) were signing up for this race I did not want to register. I ran Providence in 2014 and had a bad experience.  I set out to try to Boston Qualify and crashed and burned around mile 16.  When I realized that would not BQ I fell apart.  Kim tried to console me as I cried. He kept me moving by doing a walk/run.  I ended up registering for the marathon but in the back of my mind, I sort of expecting the race to be canceled due to COVID.  As the days got closer, there was no sign of the race canceling and reality hit, oh crap, I am going to have to run this marathon! I felt like I was not mentally ready and I didn’t give my training the 100%

As the weeks approached, I started to stalk the weather as the 10-day looked like it was going to warm up by the time we finished.  I was hopeful though that we’d be done before it got too hot.

We arrived in Providence, our first time staying at a hotel in a year.  It was strange checking in with masks on and hand sanitizer by each elevator bank.  We checked in and went to pick up our bib/jacket and beanie.  I was pleased with the swag and headed back to grab lunch.  So many restaurants did not make it through COVID as we searched for lunch.  We found a brewery and sat down to eat realizing this was our first time at a restaurant in over a year!  I had French fries!  I forgot how horribly wonderful they were.

We went back to the hotel, took a nap and then headed out to dinner with Collen and her family.  We ate at Constantino’s Italian restaurant in downtown Providence.  The streets were busy and there was not a sign anywhere of a pandemic.

We went to bed and were ready for whatever the marathon brought us.

Marathon day Kim and I had our normal pre-marathon ritual and headed to the start.  We met all our Fleet Feet “Kool Kids” for a photo. Colleens husband Rich took our photo having everyone say “Vagina”, we all smiled and cracked up. Then our friend Adrian arrived late.  One more photo every one yelled!  Rich took our photo again and said “we need to make this one British for Adrian”, everyone say “Bloody Vagina”….. We all laughed! Well, not sure if he, appreciated it!

We took off in waves for social distancing protocols.  The weather was chilly but not too cold to take off my throw away shirt.  About a mile in the fast kids took off and we stayed behind. While running at about mile 3 up a small incline the dude next to us let one rip. Kim chuckled and said “Jeanne”. I said that wasn’t me, as the poor dude behind us said - sorry.  We both had a good laugh for the next mile.  I was about 6 miles in and thought, “this kind of sucks, my back hurts, my neck is stiff but I’m not saying anything, maybe it’ll get better”.  As the miles progressed, the lower back was about the same and I started feeling tired.  We started to fuel and then the first hill came.  I said “wow, are we in Big Sur”?  It was a series of hills, kind of like the hills in Boston.  Just when you feel like had it, the hill would subside and then there was another.  By the time we got to the last one, I put my head down and counted my steps to distract my mind.  Kaitlyn who had been running with us was gone.  She zipped right up the hill like a gazelle.  I thought “well, there goes Kaitlyn”, but when we got to the top, she was standing waiting for us with that smile.  We all regrouped and started running again.  Now, my back was fine, but I started to really feel the effects of the rising temperature.  We slowed down and as I looked ahead; Kaitlyn just kept getting further away.  It’s funny, I couldn’t remember the course from when I ran it the first time until I got to the area where there was a fence that led into the golf course.  This is where the memories came flooding back of the #meltdownof2014. This is where I stopped and started crying.  I thought to myself, oh hell no, this is not going to happen again.  As we ran through this beautiful open area where there was no escape from the sun I refused to fail.  There was a woman in front of us that dropped her water bottle not once, but 2 times.  She kept apologizing, and also started “breaking wind” and Kim just looked and me and we cracked up.  When we turned left, we were finally out of the direct sunlight.  This was when the walking started.  I told Kim I needed to walk.  I was having waves of nausea.  Kim was forcing me to eat.  Normally I LOVE honey stingers, but let me tell you, when you are not feeling well, they are horrible!  Kim kept saying “here eat more”, and my response was “I can’t eat the first piece yet.  Then as we were heading to the higher miles, we ran into some of our Fleet Feet family runners that were also experiencing the heat.  So many runners were walking.  I would be next to one and we’d just look at each other with the same “what the f&*k” look on our faces.  Kim kept pushing me to keep moving.  We did a 9-minute run/1 minute walk.  Finally, when we were at mile 25, we saw another FF runner and Kim said “hey how did you do? What was your time? he replied and said “I didn’t finish yet, I’ve been walking for miles”.  He ran with us for the final mile.  Then as we turned the corner, some horrible evil being threw a hill in at mile 26.1.  Kim said “come on, just keep going”!  I gave it everything that I had and ran up the hill. I made it close to the top and walked.  Then my friend came up next to me and I thought, oh crap, I can’t let him beat me, so I took off with every ounce of energy and I crested the hill and tuned left to see Kim waiting for me with his hand out.  I said “I’m going to be sick” but muscled through and caught up to Kim.  The announcer was yelling “look, who do you think is going to beat who?  The crowd went wild as I grabbed Kim’s hand and we crossed the finish line together holding hands.  It was epic.  It was until I stopped and the smiles went away.  I started dry heaving.  Ugh.  Funny thing about it, there was no medical team there to help me.  The presence of COVID was there and my mask was not on my face.  I finally got my composure, put my mask on, grabbed my medal, and headed out to meet all the “Kool kids”.  There is something so special about his group. We may have been running our own race and alone, but there was some special comraderie that no runner would be left behind.  When one of us fell back, there was another Kool Kid there to push them to finish.  I have been coaching for Fleet Feet since 2013 and this group has the closest bond.  We are no longer running friends, we are family.

I wouldn’t trade this for anything.

Would I run this race again? Hell yes! I am coming back next year and I’m going to get to mile where I had the melt down and scream “F-You mile 18 (ish) you will never take me down again! 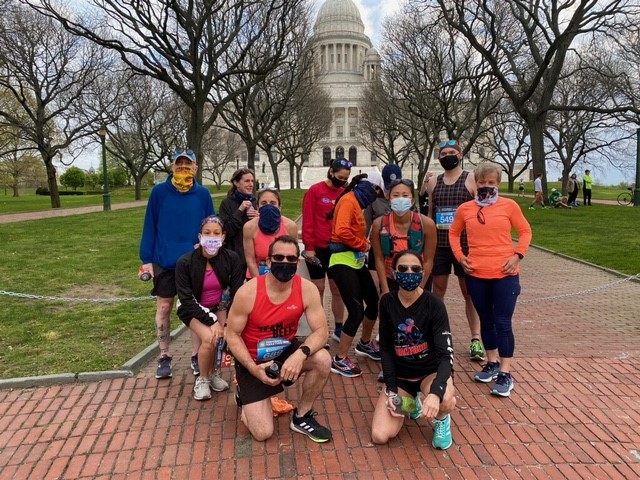 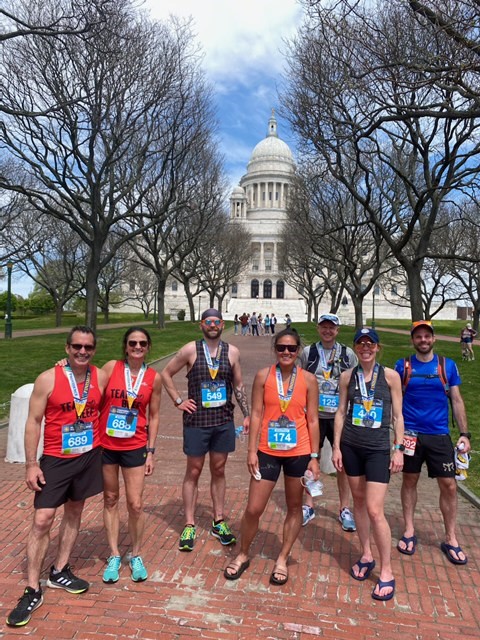 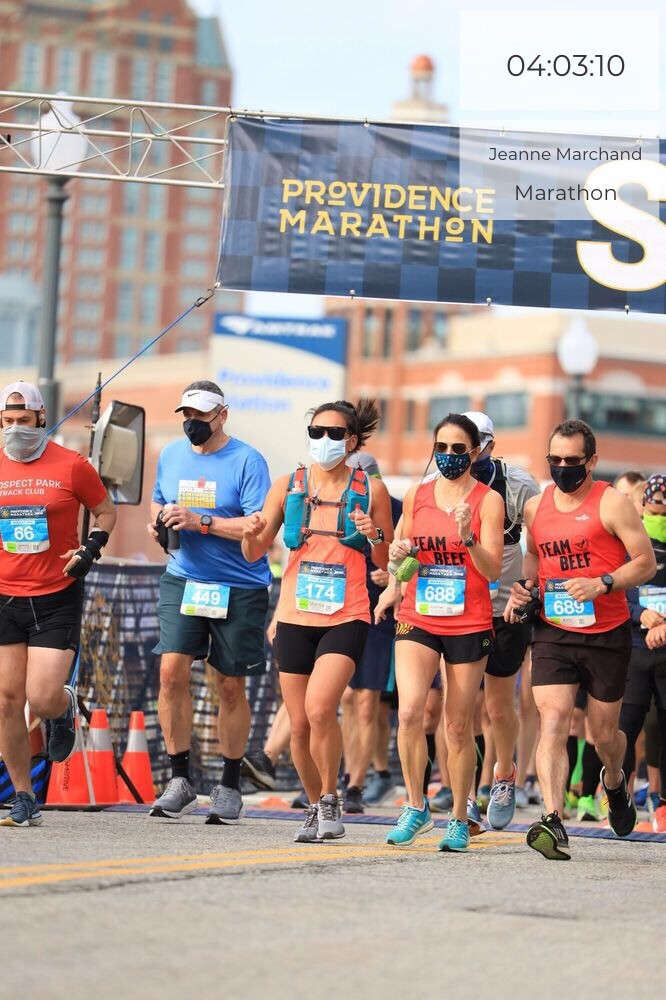 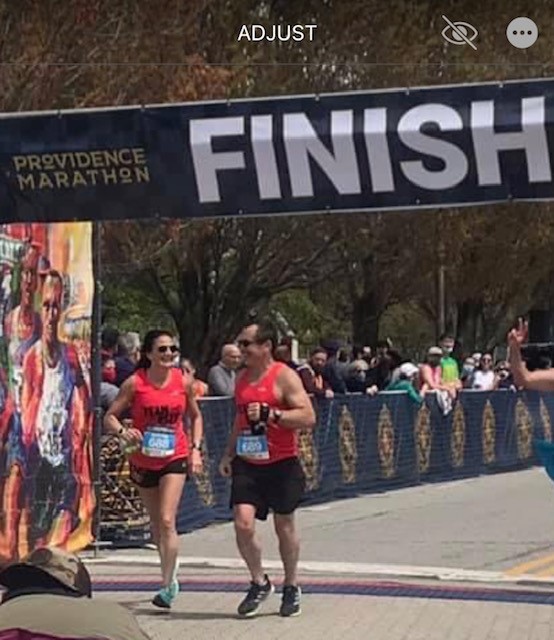